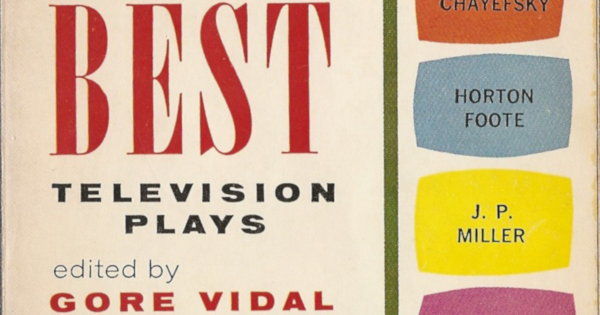 A family member stumbled upon this book while on vacation and gave it to me as a Christmas present. I can’t imagine there are a lot of people who would have been thrilled to receive a copy of Best Television Plays. I was certainly was and promptly announced I would be reviewing it at my blog as soon as possible. It includes “eight complete one-hour dramas by television’s outstanding writers.” The eight writers in question are listed on the front cover; the plays (or episodes) are listed on the back cover.

I must admit that I was only familiar with six of these writers. The two names I didn’t recognize right away were Robert Alan Aurthur and J.P. Miller. Once I looked them up, however, I realized I knew more about their work than I thought. 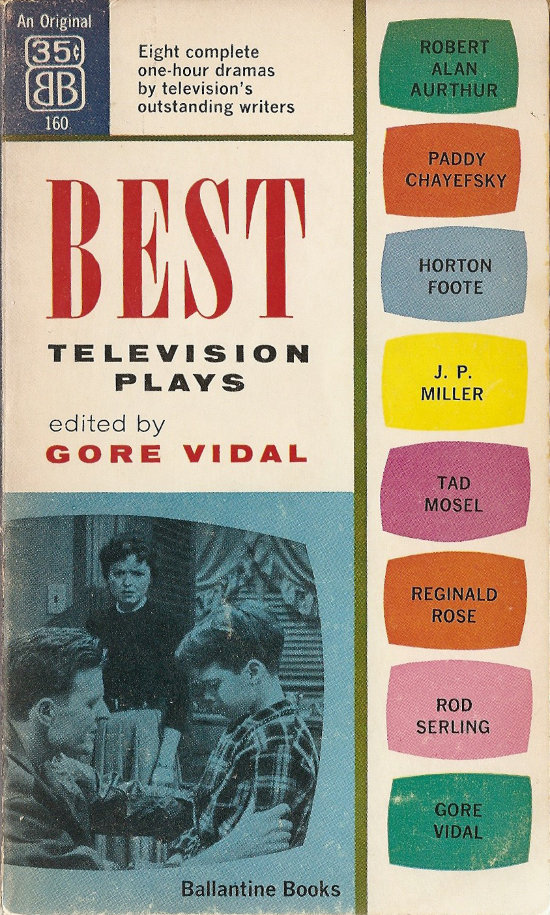 Gore Vidal, whose “Visit to a Small Planet” is one of the dramas reprinted, edited Best Television Plays but there’s no introduction or any explanation of what sort of editing was required. There is the following notice on the back cover:

Each of these plays has won enthusiastic praise from critics and has been discussed by millions of Americans. In presenting them in a reading edition, the authors have expanded stage directions and descriptions of settings and characters to make the plays more enjoyable to the reader.

In other words, Best Television Plays doesn’t contain reproductions of actual scripts. That’s too bad because it means the book isn’t really useful the way an actual copy of the script might be. It can’t be used to compare an early draft to the final draft or the final draft to what ultimately aired. The book was no doubt aimed at the sort of readers who both attended plays and watched live dramas on television. At a time when repeats were unheard of, having eight dramas compiled in a book was the next best thing.

I only have access to one of the eight dramas–Rod Serling’s “The Strike,” which was included in the Archive of American Television Presents Studio One DVD collection released in 2008. I watched portions of the episode to compare to the version reprinted in Best Television Plays. Much of the dialogue is close to but not quite verbatim. There are slight differences here and there but everything is basically accurate. There were multiple lines of dialogue spoken on screen that aren’t in the book and vice versa.

The “expanded stage directions and descriptions of settings and characters” in the book are often wrong. For example, the description indicates a character is smoking but he isn’t in the episode that aired. Or a character is described as standing in front of a window but is actually sitting at a table. There are also several instances in which added description would have been useful for someone reading the play rather than watching it on television. I don’t know if I would recommend Best Television Plays to anyone–not even passionate fans of the Golden Age of Television or aspiring scriptwriters hoping to learn from early masters of the craft. Because these are “reading editions” of television dramas and not scripts, they’re too different to be useful as examples or research material.

I suppose if someone is obsessed with watching one of the eight dramas but isn’t able to, reading a slightly expanded version of it might be enjoyable. What might be interesting would be to compare the shooting script for one of these dramas to the version found in Best Television Plays and then compare those to the television version.

I will say that after reading Gore Vidal’s “Visit to a Small Planet” I now really want to see the Goodyear Television Playhouse broadcast.