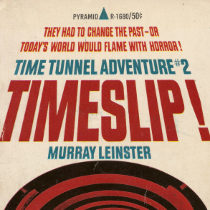 It’s been over a year since I reviewed Murray Leinster’s first tie-in novel based on Irwin Allen’s The Time Tunnel and I still haven’t had a chance to sit down and watch any episodes. Nevertheless, today I’m reviewing the second and final tie-in novel, which was also written by Leinster. It features a somewhat awkward title: Time Tunnel Adventure #2 – Timeslip! It was published in July 1967 by Pyramid Books, several months after the final first-run episode of the series aired on ABC (on April 7th, 1967 to be exact).

Each episode of the TV show saw scientists Tony Newman (played by James Darren) and Doug Phillips (played by Robert Colbert) transported via the Time Tunnel to a new time period where they usually got caught up in some historical event or fought aliens. The two were lost in time, unable to be brought back to the present. Keeping a watchful eye on the pair were General Kirk (played by Whit Bissell), Dr. Ann MacGregor (played by Lee Meriwether), and Dr. Raymond Swain (played by John Zaremba).

Tony, Doug, General Kirk, and Dr. MacGregor were both featured in the first tie-in novel. Dr. Swain is nowhere to be found. Also, Dr. MacGregor is referred to as “The MacGregor,” for reasons that are never explained. At the end of the first novel, Tony and Doug were successfully returned to the present and were not stranded in time. 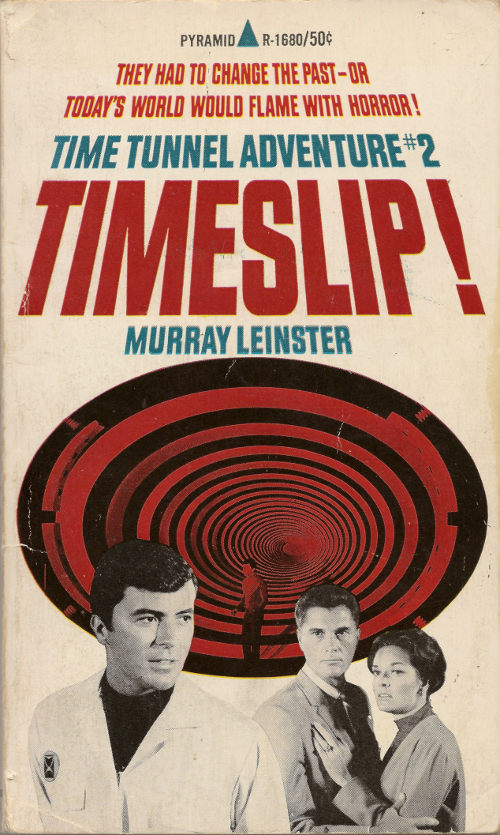 In Timeslip!, Project Tic-Toc is tasked by visiting General Osborne to send a top secret intercontinental ballistic “Wotan” missile through time and space to a MacMurdo Sound in Antarctica–in 1847. The government wants proof that the Time Tunnel can be used for military purposes. Should the test succeed, the civilians who devised and built the Time Tunnel will be dismissed and Project Tic-Toc will belong to the military.

The novel features several new characters, including General Osborne. There’s Tech Sergeant Christopher, who works with or for General Osborne, as well as Sam Creighton, one of the scientists who helped build Project Tic-Toc. General Osborne doesn’t believe in time travel. He thinks the Time Tunnel is all an elaborate hoax and goes to great lengths to try to expose the hoax. Instead, he ends up damaging the Time Tunnel and sending the Wotan missile out of control.

It does end up in 1847, only it lands in a pond in Mexico City rather than Antarctica. That’s bad enough. In the present, construction work threatens to uncover the missile, which contains enough explosive fuel to level most of the area. A plan to retrieve the missile in the past is complicated by the capture of Mexico City by the U.S. Army during the Mexican-American War. Tony and Sam strap on time harnesses and travel to 1847 through the Time Tunnel to test whether the Wotan missile can be pulled from the pond and transported back to the present.

While in the past, Tony and Sam try to save an American soldier. Sadly, he winds up dead. That’s when they realize the dead man is Sam’s great-great-grandfather, a military hero who was supposed to die in Mexico City. The rest of the novel is a race against time on two fronts: Sam must impersonate his great-great-grandfather to ensure history unfolds as it should and the Wotan missile has to be retrieved before a bulldozer accidentally sets it off. 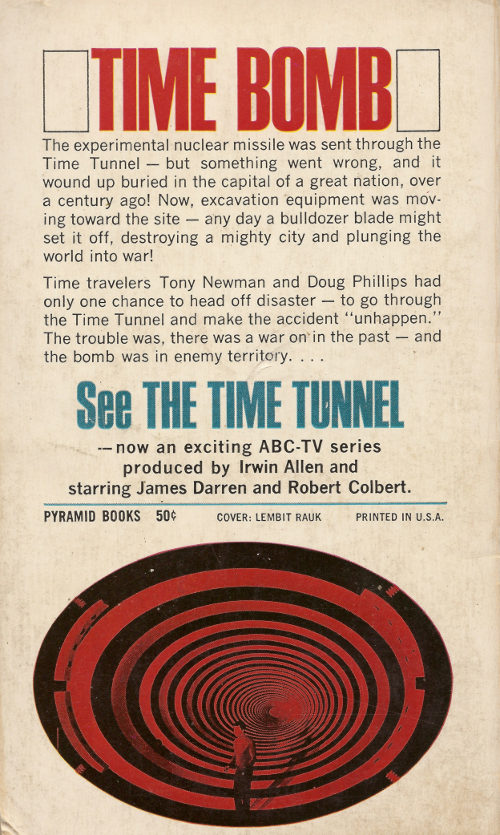 I had a hard time following some of the explanations laid out for time travel in the novel. I’m not sure whether that reflects poorly on Leinster’s writing or on my reading comprehension skills. At one point, Doug explains how any time spent in the past is likewise spent in the present: if they go back in time to try to recover the Wotan and spend ten days doing so, they’ll return to the present ten days after they left, and during those ten days the missile will have exploded. They have to delay construction in the present to give themselves time in the past.

There’s a lot of jargon throughout the novel: the aforementioned time harnesses; “Out Yonder” (where the Time Tunnel sends people); the “traveller” (a platform sent through time and space); and “buzzards” (electronic devices in the shape of birds that fly around in the past sending sound and video back to the present). At times, all of this terminology can overwhelm the writing. Leinster also has a tendency to overuse colons when introducing dialogue. Some examples:

The MacGregor said with asperity:

Tony closed the door behind him and said:

I will admit that by the end of the novel, I was no longer noticing all the colons, but it took some getting used to. Leinster also did the same thing in his first novel. Maybe it was just his style. Timeslip! does not feature any footnotes explaining historical events the way his first novel did, however.

Curiously, the back cover doesn’t feature the title but instead declares TIME BOMB in large red letters. That certainly fits the novel better than TIMESLIP.

I’m curious how fans of The Time Tunnel reacted to reading either of Murray Leinster’s tie-in novels. Were they upset that Leinster’s version of the Time Tunnel was so different from what was seen on television? Or did they enjoy the adventures and ignore the inconsistencies? Fans may also have been turned off by the fact that Tony and Doug aren’t a team in Timeslip! Tony stays behind at Project Tic-Toc while Doug and Sam travel into the past.