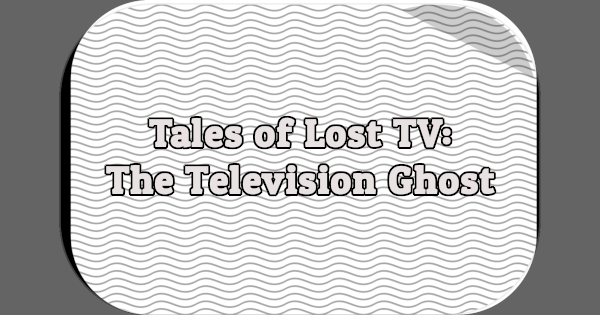 However, audio reached a much larger audience: more than eighty stations connected to WABC in New York City, the flagship station of the CBS radio network.

Programming consisted of boxing, dancing, singing, puppet shows, dramatic sketches, comedy routines, and more. A little over a month after the station signed on, W2XAB premiered The Television Ghost.

I doubt many people reading this are familiar with The Television Ghost. It may have been the first regular television drama. Not surprisingly, given its age, almost nothing is known about the series. Wikipedia and the Internet Movie Database agree on the following: George Kelting portrayed the ghost and the series aired from 1931 to 1933. Supposedly, each episode featured the ghost of a murder victim revealing how they were killed.

Much of the limited information that exists about The Television Ghost, including Kelting’s involvement, comes from the 1986 book American Television Drama: The Experimental Years by William Hawes. I’ve yet to find any contemporary accounts that mention George Kelting. That may have been intentional, as this October 1931 article from The Daily Star suggests:

The “Television Ghost,” the well-known Columbia artist whose identity (like that of “The Shadow” of a former series) is concealed in connection with this series of hair raising television murder mysteries, is causing some commotion around the CBS building’s twenty-third floor, where the experimental visual studio is located.

Garbed in a sheet, his hands and face covered with a ghastly white make-up, he is far from a treat to the neurotic. To date he has popped around corners to frighten one soprano, one supposedly brave lightweight fighter, and one of Columbia’s porters, who dropped his broom and departed at excessive speed.

At least two other contemporary articles refer to the ghost–actually, George Kelting–scaring folks at the CBS building.

A Man in a Sheet

According to Hawes, The Television Ghost premiered on Thursday, September 3rd, 1931. My own research indicates the series debuted a week earlier on Thursday, August 27th. It ran for 15 minutes, presumably every week. At some point it may have shifted to Tuesdays and then Mondays.

I’m not aware of any firsthand accounts of what The Television Ghost looked like on a TV set. Viewers probably saw a static shot of the face of the ghost, or maybe the upper torso. In October 1931, The New York Sun published the following:

This mysterious character tells you the latest murder mysteries in weird costume, and his shrill voice and facial expressions are well worth while watching.

It’s not quite a review but it’s the only description of the ghost I’ve come across. Fortunately, a picture of the ghost survives:

Published in The New York Times in October 1931, this is likely a promotional photograph. Presumably, it’s George Kelting under the sheet.

W2XAB went off the air temporarily in early July 1932. CBS put its engineers to work synchronizing sight and sound. The station resumed daily broadcasts–transmitting video and audio with one signal–with a special anniversary program on Thursday, July 21st.

When The Television Ghost returned on Monday, July 25th, a new actor stepped in front of the camera clad in a white sheet. Artells Dickson, a singer and harmonica player, took over as the ghost.

CBS halted its television experiments in February 1933, shutting down W2XBS. It’s unclear whether The Television Ghost continued airing until the end. It’s possible the series ended in late 1932. Or it may have continued until the very end. Most sources claim it remained on the air until 1933. The number of episodes broadcast is likewise unknown.

The Television Ghost celebrated its 85th anniversary last year. Even I didn’t mark the occasion. Few people realize television existed in 1931. W2XAB broadcast many programs, not just The Television Ghost. Nothing survives. There are no scripts, no audio recordings, nothing.

The fact that a picture of the ghost exists is remarkable. Perhaps there are additional promotional photographs somewhere, waiting for an intrepid early television enthusiast to uncover them.

Do you know anything about The Television Ghost? If so, let me know. Otherwise, hit the comments with your thoughts.