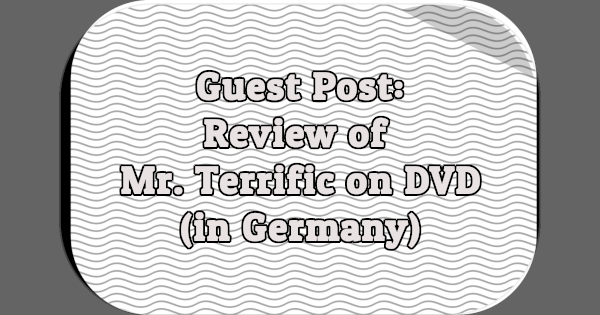 The following guest post by Rob Falcone reviews “Immer, wenn er Pillen nahm – Die komplette Serie” (“Mr. Terrific — The Complete Series”), a DVD set released in Germany in July 2009. Rob may be the biggest fan of Mr. Terrific in the world and is also an expert on the short-lived show. If you order the set, you must have a DVD player capable of playing DVDs encoded for Region 2.

When you come right down to it, the long awaited DVD release of the obscure 1967 sitcom “Mr. Terrific” is a pretty bare-bones kind of deal. Remember that the principal target audience for this particular set is fans who live in Germany. Such fans, having actually been exposed to syndicated broadcasts of the series within the last decade, might well be disappointed in the dearth of extras presented here. These are limited chiefly to the original, English language option and several pages of text, in German, presenting information about the show.

There is no footage included that would be considered “new” to a German audience. The original, unsold 1966 pilot starring Alan Young is absent; as is the subsequent 1968 compilation film, “The Pill Caper.”

But American fans, and those in other countries, may find this release quite remarkable for two reasons. Number 1 is the fact that it exists at all, the series having been given up for lost in the country of its origin. Number 2 is the aforementioned English language option which gives the viewer a chance to hear the voices of the actual actors who brought these characters to life.

Listed in the order in which they appear in the new DVD release. The numbers in parentheses denote each episode’s position in the original, 1967 broadcast sequence:

*There is an abrupt cut leading into the climactic scene of “Stanley the Jailbreaker.” It looks like there might be a little something missing. I’ve seen a couple of different prints from German TV distribution, and they all have the same problem.

**There’s an awkward cut almost halfway through “Fly, Ballerina, Fly.” Apparently one of guest star Cynthia Lynn’s lines was dropped, but this might have been the case even in the 1967 aired print.

For those who are unfamiliar with “Mr. Terrific,” it is the story of Stanley Beamish (played by Stephen Strimpell): a sweet, underdeveloped gas station owner who happens to be the only person capable of deriving super strength and flying ability from a government supplied “power pill.” Stanley’s best friend, partner and roommate Hal Walters (Dick Gautier) is a mildly egocentric ladies man who knows nothing of Stanley”™s alter ego. The two government agents who give Stanley his pills and send him on assignments are Barton J. Reed (John McGiver) and Harley Trent (Paul Smith).

“Mr. Terrific” has hardly been seen, and apparently not been syndicated at all, in the United States since it first aired in 1967: a CBS mid-season replacement that produced only 17 episodes in its January to August run. Fans, mostly folks who were kids in ’67, had to wonder if there was any chance of seeing this little gem again. Now, thanks to a devoted German fan base, our prayers have been answered. Here are all 17 episodes; nice sharp prints, and all in English as well as German dubs.

That having been said, and as wonderful as the set is for fans of the show, there are certainly some problems with the release.

Now for a series as episodic as “Mr. Terrific,” the sequence of installments is generally not that vital. But purists and continuity buffs may be irked by the contradictions that exist here. The second episode in the set “Harley and the Killer” makes reference to events that took place in the fourth episode “Mr. Big Curtsies Out.” And the early placement of “Killer” contradicts a line of dialogue (concerning whether or not Stanley has ever flown with passengers) in the tenth episode “Fly, Ballerina, Fly.” The next-to-last episode “Stanley the Fighter” introduces George (Bonnie Hughes), an assistant attendant at Hal and Stanley’s Service Station. But George has already appeared in two episodes in the set as well as in the establishing shot for a third.

The first episode in this set, and the first aired in 1967, is “Matchless.” This appears to be the only episode in this collection that’s edited. It begins with the regular, illustrated opening but with no introductory segment, and the traditional narration spoken by Paul Frees has been wiped from the soundtrack. Since this “aired pilot,” as it is often called, contains relatively little exposition, it’s odd that Frees’ narration should be removed from this one segment. The rest of the episode plays out very much like the edited print that ran here on TVLand a few years back. So perennial drunk Hal Smith is relegated to an extra, and his two exchanges with Strimpell are excised, as is the scene where foreign agent Shenko (Harold J. Stone) dispatches one of the good guys. The second half of this episode is more inclusive, and less choppy, than the TVLand print but still not quite complete.

I clocked “Matchless,” and it comes in at 24 minutes and 10 seconds. I also clocked the last four episodes, and they all hover around the same length. Perhaps they included an edited print in this one instance to maintain some sort of uniformity of length.

There are also occasional, mostly minor, problems with synchronization. I imagine this isn’t too uncommon for some of these older shows, and I don’t believe it is unique to this particular release of the series. The sound seems to be slightly ahead of the action pretty much throughout the episode “Stanley the Jailbreaker.” I first noticed the same problem while watching a print of “Jailbreaker” that was taped off German television years ago. Other instances, notably a really striking problem confined to the introductory segment of “Stanley Joins the Circus,” may not have been quite so visible in the poor quality prints that had previously emerged.

The German episode titles, which are clearly viewable on the disc menu, are also briefly super-imposed on the screen after the credits role. In addition, these prints all seem to be missing one, quick, cartoonish image of a noble steed that originally appeared in the show’s illustrated opening. These, of course, are minor issues.

Generally speaking, despite a few problems that might irk some fans, these are nice, clean prints of all 17 episodes, neatly reproduced in a two disc collection. The menus are clear and easy to navigate, even for people who can’t read German.

The package art is appealing, although the depiction of the “power pills” looks more like evidence in a drug bust than anything you’re likely to see on “Mr. Terrific.” One photo that appears on the back of the box, a shot of our hero racing with a jetliner, was particularly noteworthy to Stephen Strimpell. According to him, the still was never actually used to promote the show. He also maintained that it was not he, but his good friend and stunt double Chuck Courtney, that appeared in the picture. This was one of the few mementos of “Mr. Terrific” he retained and cherished.

In a letter I received from Strimpell just about two months before his death in 2006, he told me that he was “not one to dwell on things past.” I respect his sentiment. I cannot totally agree with it.

I’m not alone in cherishing the culture I grew up in. Many people in my age group have a great fondness for, and even a longing to revisit, the fleeting, televised images of our youth. For me, “Mr. Terrific” has been one of the most important and elusive of these images.

Thank Heaven, in an age in which every manic cackle that escapes Spongebob’s porous lips has been preserved on home video for ages to come, somebody remembered a slight, young man with tousled hair who flapped his arms, so he could fly. Thank Heaven Mr. Terrific is back.