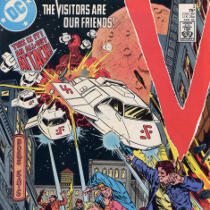 With ABC’s remake of V: The Series drawing 14.3 million viewers (and earning a 5.2 Nielsen rating in the coveted Adults 18-49 demographic) I decided to review another issue of DC’s comic book adaptation of NBC’s 1984-1985 version. Issue #3 came out in April of 1985 and, once again, the cover artwork had absolutely nothing to do with the story. But that’s not uncommon with comic books. At the end of issue #2 (which I reviewed in August), Mike Donovan, Juliet Parrish and another resistance member, Hart, had been imprisoned by a town working with the Visitors and things didn’t look too good.

Perhaps not surprisingly, things turned out considerably better in issue #3. Willie and another resistance member, with the help of young Billy, were able to free the others. They were soon attacked by Visitors and Boyce (the other resistance member) was killed. After splitting up, Juliet and Hart were captured by the Visitor leader. Billy, hiding in a building, tried to free them but was killed shortly thereafter. Juliet and Hart were taken aboard the Visitor ship.

An enraged Mike burst into Billy’s funeral and berated the townspeople for working with the Visitors. He begged them to help bring down the Visitor ship but to no avail. So, he and Willie went out to get the job done themselves. The two taped grenades to the top of the geysers above which the ship was floating and when the geysers went off the grenades were thrown into the air. The resulting explosion successfully knocked the ship out of the air. 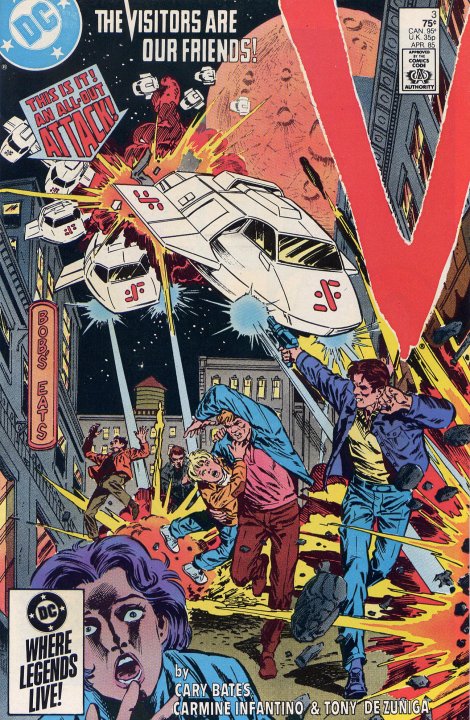 In a shocking turn of events an armed crowd of townspeople suddenly arrive on the scene and the battle is joined. Juliet and Hart, after escaping from a holding cell on the ship, meet up with Mike and Willie and the four run for it. The ship explodes and the Visitor leader escapes. Unfortunately, he’ll have to meet with an angry Diana. Mike, Juliet and the others take their leave of the town, which is firmly on the side of the resistance, secure in the knowledge that Billy’s death meant something.

The issue ends with a Visitor named Lorne pulling up outside Nathan Bates’ office in a cart said to be carrying Ham Tyler and Chris Farber. But Bates is in for a surprise: Ham and Chris are forcing Lorne to bring them close enough to Bates to kill him.