At the end of issue #3, Mike Donovan, Juliet Parrish and other members of the resistance had convinced a small town to stop working with the Visitors. Meanwhile, Ham Tyler and Chris Farber are forcing a Visitor mercenary named Lorne to bring them to Nathan Bates. As issue #4 opens, Ham and Chris are playing dead and Lorne is transporting their “bodies” to Nathan. The moment they’re inside, Ham and Chris strike. Lorne is soon dead and Ham has a gun to Nathan’s head. Meanwhile, an astronomer named Earl Meagan is on television debating a scientist/professor by the name of Myron Grasimov. Mike and Julie are tuned in.

Dr. Meagan, who looks quite a bit like Carl Sagan, believes that there might be altruistic alien species somewhere in the universe who may one day visit Earth. Dr. Grasimov, on the other hand, is convinced that only an evil alien race would go to all the trouble of coming to our planet. After the debate, Dr. Grasimov is approached in the hallway by a man who turns out to be a Visitor. He disintegrates Dr. Grasimov with the shake of a hand and then reports back to his superiors. 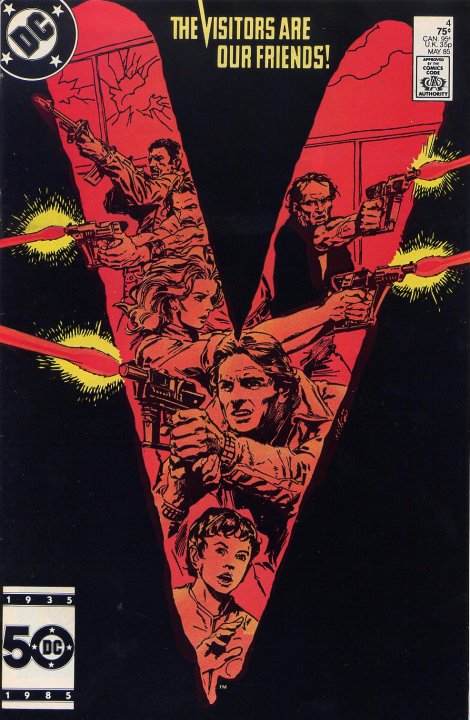 Nathan convince Ham and Chris not to kill him by telling them that the Visitors captured Elizabeth, the Star Child, and his son Kyle. Thankfully, Elizabeth and Kyle soon escaped but they’re now hiding out in a forest and the Visitors are likely on their way. Nathan wants Ham and Chris to find them. The two ride into the forest in a jeep sporting a flamethrower. They’re soon are able to find Elizabeth, unconscious and surrounded by an energy field, but Kyle is nowhere to be found. Elizabeth later wakes up at Nathan’s office and reveals that Kyle is in terrible trouble.

Mike and Julie take a Visitor shuttle to the middle of the desert to pick up Dr. Meagan, who becomes one of a very small number of people given access to the inner circle of the Resistance. Although Julie and Dr. Meagan get along famously, Mike is certain there is something wrong. The fact that he has reached out to Diana and asked for a peace summit only makes Mike worry more. Diana agreed and that can only mean a trap. But Dr. Meagan isn’t the mild-mannered astronomer he appears to be. He has a backup plan in case the peace summit doesn’t pan out, one that neither he nor Diana will survive.

The artwork here is par for the course. The characters are recognizable but not perfect. What’s notable about this issue is the inclusion of the first letters column, called V-Mail. Here’s a brief message that came before the letters:

The mail came in like a deluge in just the first few weeks. We’re going to keep relatively quiet both this issue and next as we let you comment on our first issue.

But first a word of caution. As the production of the weekly series has been progressing, changes are in the wind. New characters, new relationships and departures are all on the horizon. Please remember that we’re working several months ahead, so don’t be confused if things are a little out of synch between here and the television series. For example, many of you asked why we used Chris in the first issue while he had not been seen on the series. By no you know he is on the series, just not that often.

And now, for a very special first letter:

That first letter was from none other than Faye Grant, the actress who played Juliet Parrish. Here’s what she had to say:

I can’t tell you how thrilled I am with the first issue of DC’s V.

It wouldn’t be a bad idea to send forthcoming issues to our writers–they might see some entirely new things!

I hope all is well with you. It was nice bumping into you and chatting for a second in September.

The Bob in question is Robert Greenberger, then associate editor of DC Comics Inc., who was the one answering the questions, two of which asked why the Visitors in the comic still had a slight reverberation in their voices, as seen in both V (The Miniseries) and V: The Final Battle, when the television series had ignored that distinctive feature. Greenberger explained that while budgetary constraints meant the television series had to do away with the voices, “we’re continuing it with Blatt-Singer’s [producer of V: The Series] blessing.”