Is there a lost episode of Hawaii Five-O? Technically, no. In this week’s DVD Tuesday I mentioned that there’s an episode from the second season of Hawaii Five-O that hasn’t been seen since its original broadcast. Someone in the comments asked why the episode is missing from the DVD release.

The episode was called “Bored She Hung Herself.” It aired for reportedly the first and only time on Wednesday, January 7th, 1970 during Hawaii Five-O‘s second season. Here’s a summary of the episode published in numerous newspaper television listings across the country in January 1970:

The supposed suicide of Wanda Parker, beautiful daughter of a prominent psychiatrist, seems to involve her bearded malingering boyfriend. Her father is convinced that the long-haired mystic his daughter was associated with at the time of the incident is responsible, but Steve McGarrett doesn’t necessarily agree. Jack Lord stars, with Pamela Murphy as Wanda, William Smithers as her father and Don Quine as the mystic boyfriend.

Why is the episode so controversial that it has never been seen again since its original broadcast? The following is from the Quick FAQ at the Hawaii Five-O Home Page:

According to Mrs. Leonard Freeman (wife of the late creator of the show), speaking to some fans at the 1996 Five-O convention, someone tried the yoga-related hanging technique depicted in the show and killed themselves. As a result, perhaps because of litigation (this is my opinion, not Mrs. Freeman’s), the show was not rebroadcast and never included in any syndication packages.

[Note: An earlier version of the Quick FAQ also suggested that including “Bored She Hung Herself” would also require CBS to add an extra disc to the Season Two DVD set.]

“Bored She Hung Herself” is not truly lost. It isn’t missing, either. It’s simply unavailable. I am certain the original film elements are safely tucked away in a vault with the rest of the series. Copyright on the episode was renewed in January 1997 by CBS, Inc. Furthermore, copies of the episode have been in the hands of private collectors, apparently sourced from a rather poor quality 16mm print of the episode that includes CBS identification and network bumpers. 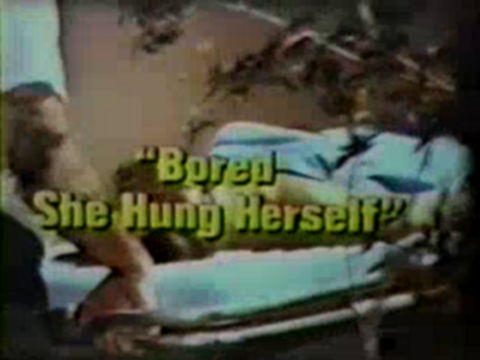 If anyone has more information about why “Bored She Hung Herself” has been suppressed or remembers watching it when it originally aired, be sure to hit the comments. I would also be interested in knowing whether or not the episode was syndicated internationally, if there are any international fans of Hawaii Five-O reading this.

25 Replies to “A Lost Episode of Hawaii Five-O?”