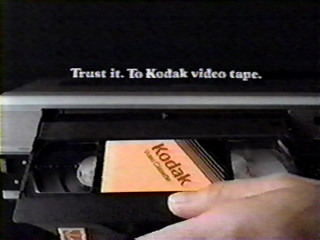 Here’s a commercial from November 1984 for Kodak video tape, which is said to capture the sights and sounds of every moment with color that’s beautifully accurate. Note the disclaimer at the end: “Copyright law may restrict certain uses of copyrighted material.” The famous Betamax case which declared the time-shifting of television programs to be fair use had been decided by the Supreme Court less than a year earlier in January 1984. Depending on when the commercial was first broadcast, it may have been in use prior to the Supreme Court decision.