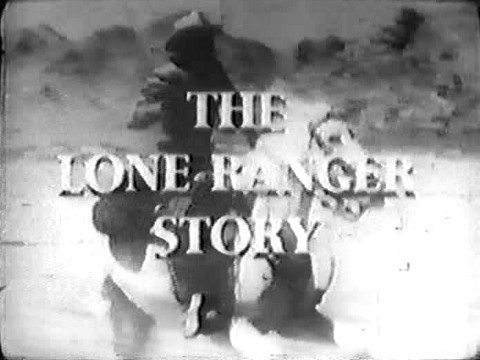 Over the years, I’ve probably received more than a thousand e-mails from people asking about television shows and specials they vaguely remember, hoping I can help identify and confirm their recollections. Sometimes, I’m the one trying to track down information about a show or special I’d like to know more about. This is one of those times.

Yesterday, while going through a collection of ABC promos from the 1950s that I acquired on DVD several years ago, I came across the opening and closing credits to an anniversary special relating to The Lone Ranger, as well as a few minutes of footage from the special itself. The quality is pretty bad. The original source for this material was no doubt a very rough 16mm print, transferred to VHS at some point and then converted to DVD.

According to the opening credits, the special was called “The Lone Ranger Story” and would answer questions like why the Lone Ranger wears his mask and why he uses silver bullets. It was sponsored by General Mills. The closing credits indicate it was produced by The Lone Ranger, Inc. with George B. Seitz, Jr. as director and writer. The copyright date is given as 1955.

I assumed it would be easy to look this up online and figure out what it was. I was wrong.

The Lone Ranger character debuted on radio in 1933. The television series The Lone Ranger premiered on ABC in September 1949, with Clayton Moore in the title role. A total of 221 episodes were broadcast over the course of eight seasons (three of which consisted entirely of repeats), with the final first-run episode airing in June 1957. The 1956-1957 season was filmed in color. From 1952-1953, John Hurt played the Lone Ranger.

I found a number of references to a 22nd anniversary special airing in February 1955, including television listings in a few newspapers and a review in Broadcasting*Telecasting. It first aired on Saturday, February 12th, 1955 from 1-2PM on CBS and again the following day on ABC from 8-9PM. I found no mention of it being in color and nothing to indicate whether it was made up of footage from old episodes. Unfortunately, none of these sources give an actual title, they just refer generically to an anniversary special.

So, it seems safe to say that “The Lone Ranger Story” is the 22nd anniversary special aired in February 1955 (potentially repeated in 1956, 1957 and again in 1958 for the 25th anniversary). I have found no information suggesting it was filmed or broadcast in color. If anybody reading this has purchased “The Lone Ranger Double-Barelled Feature: The Lone Ranger Story/Hi-Yo Silver” and can describe what’s on it, please hit the comments.

Some questions still remain. Was there an earlier compilation film broadcast in 1952? Could the 22nd anniversary special have been filmed in color even if it was only broadcast in black and white? What is the source for the 1955 special being titled “The Lone Ranger Rides Again?”

If nothing else, attempting to unravel this mystery has served to reinforce my long held belief that websites like Wikipedia and the Internet Movie Database are unfortunately often inaccurate

10 Replies to “Was There a 1955 Lone Ranger Color Anniversary Special?”