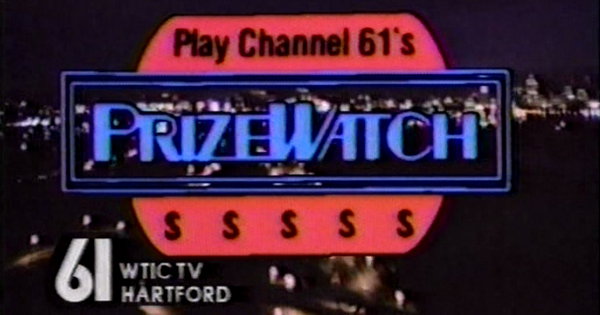 Does anyone from Connecticut remember WTIC-TV’s PrizeWatch contest from 1985? Better yet, did anyone actually win? Timed to coincide with the February 1985 sweeps period, the contest saw the station (which broadcast on Channel 61) give away $61,000 in cash and prizes. WTIC-TV had been on the air for less than six months when it kicked off the contest, having launched as an independent station in September 1984. 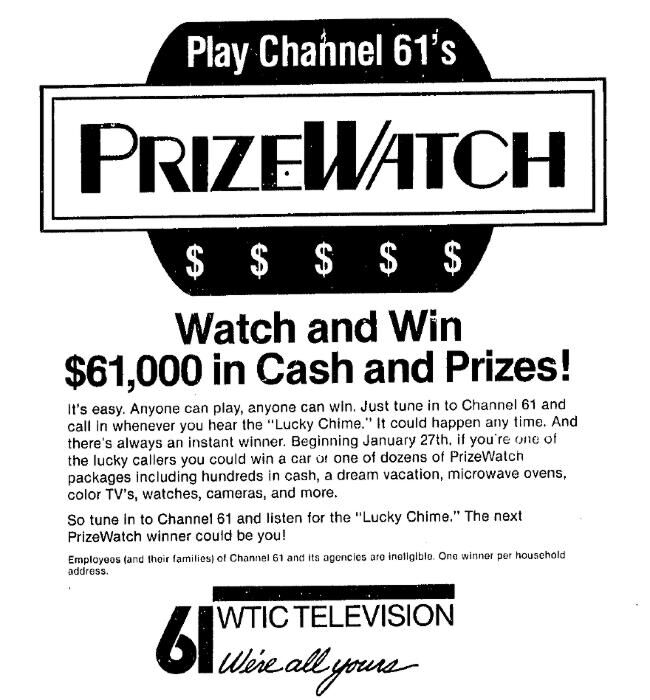 The contest was simple. At any time during the broadcast day, viewers watching WTIC-TV could expect to see and hear the PrizeWatch signal indicating that it was time to call in. The 61st caller would win cash or a prize. Most of the prizes were television sets, cameras, watches and VCRs but the station also gave away a new car and a Hawaiian vacation.

WTIC-TV wasn’t the only station in Connecticut running a contest during February sweeps. The state’s other independent station, WTXX (Channel 20), had its own contest called Watch and Win. It was a bit more involved than WTIC-TV’s PrizeWatch. Viewers had to write down the correct answers to three questions announced between 6PM and 8PM and mail them to the station to be entered to win. The grand prize was $20,000 but there were also TV sets and VCRs [1].

PrizeWatch began on Monday, January 27th. The station promoted the contest every chance it got. It even incorporated PrizeWatch into its station IDs. Here’s one that aired at 1PM on Thursday, February 28th just before an episode of Green Acres:

Later, at the end of the first commercial break, the following announcement was aired, informing viewers that the next PrizeWatch signal was coming up:

At the end of the second commercial break, this PrizeWatch signal went out, giving viewers the opportunity to win $100:

The station ran a crawl on air during Green Acres advising viewers not to call anymore because a winner had been chosen. Then, at the end of the third and final commercial break, the winner was announced:

WTIC-TV also ran spots giving lists of winners and their prizes, meant to encourage viewers to keep watching so they, too, could be a PrizeWatch winner. Here’s one with a list of winners and prizes from a single day:

And here’s a spot listing winners and prizes from the first three weeks of the contest:

PrizeWatch ended in early March 1985. Did it help WTIC-TV increase its ratings during the February 1985 sweeps period? Perhaps. The station tied with WTXX in raw ratings, both stations averaging a 2.0 rating and a 5 share of the Hartford-New Haven market, but WTXX was ahead in households, 21,000 to 19,000. WTIC-TV’s general manager, Bruce C. Mayer, called the station’s performance “tremendous” but didn’t dwell on the impact of Prize Watch, arguing “it doesn’t matter why they watch as along as they watch” [2].