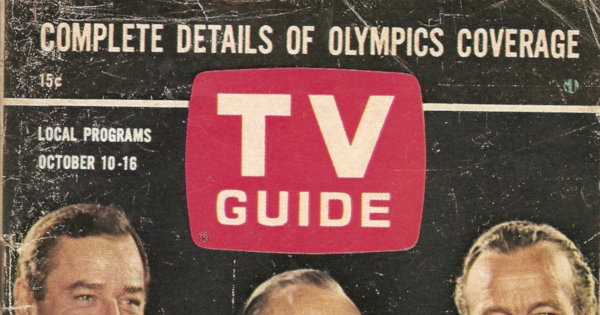 On the Cover: Gig Young, Charles Boyer, and David Niven of NBC’s The Rogues (photograph by Gene Trindl).

Although the title printed across the cover of this week’s issue may suggest otherwise, there is not an article filled with “complete details of Olympic Coverage.” There is an article about the 1964 Summer Olympics, but it isn’t about television coverage. The complete details referred to on the cover are in fact confined to a single page in the listings section.

There are four articles in this issue. “It’s Game Time In Tokyo,” by sportswriter Melvin Durslag, is the aforementioned article about the Olympics. It discusses NBC’s plans to broadcast the two-hour opening ceremony live, courtesy of the Syncom III satellite, as well as 14-and-a-half hours of taped coverage. “Too Much Too Soon” by Blake Hunter is an interesting overview of instructional television (ITV) seen in classrooms, separate but often related to educational television (ETV), as well as the recently introduced 2500-megacycle instructional television fixed service (ITVFS). “They Laughed When She Played It Straight” offers a brief biography of actress Pamela Britton, then co-starring in My Favorite Martian on CBS. 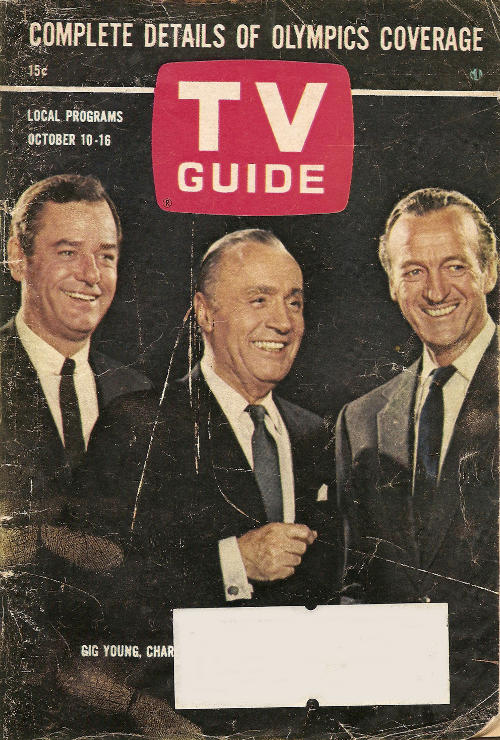 The cover article this week is Dwight Whitney’s “The ‘Rogue’ That Got Away” which includes several interesting factoids about The Rogues, which was basically a last-ditch effort by Four Star Television to create a new hit show. The death of Dick Powell in January 1963 led to a rapid decline for the company, which went from having a dozen shows on the air during the 1960-1961 season to just one during the 1963-1964 season. The Rogues, with rotating stars Niven, fellow Four Star owner Charles Boyer, and Gig Young, was an attempt to revive Four Star.

Niven could spare just five weeks over the course of April and May 1964 to come to the United States for filming. So, 21 scripts were hastily completed and the five episodes starring Niven were shot, plus brief scenes to be added to five others. A total of 30 episodes were produced and Niven appeared in more than five, so he must have returned at some point to film additional episodes. Unfortunately, The Rogues was not the huge success Four Star hoped for. NBC cancelled it after the 1964-1965 season.

The “As We See It” editorial in this issue focused on pay television (or pay-TV), specifically Pat Weaver’s Subscription Television service suspending program production and laying off 143 employees. TV Guide noted that the 6,000 subscribers watched mostly movies and sporting events, not the cultural programs championed by Weaver. That was worrisome:

We’d like to see pay-TV have a fair trial and learn whether it can offer its subscribers programs that are new and different, that are not now seen on free-TV. But what would viewers gain if the programs they now see for nothing are switched to pay-TV?

(Subscription Television launched in Los Angeles on July 17th and in San Francisco on August 14th. California responded, at the urging of movie theater owners, with a state referendum that would ban pay-TV in the state. It would pass in early November only to be ruled unconstitutional by the California State Supreme Court in March 1966. In October 1966, the U.S. Supreme Court refused to review that ruling, meaning pay-TV was legal in California. But it was too late for Subscription Television, which went bankrupt in 1965.)

As promised in the September 26th issue, Cleveland Amory’s TV reviews returned in this issue, with his thoughts on ABC’s new twice-weekly prime time soap opera Peyton Place. Suggesting that viewers would either love the show or hate it, Amory admitted that he was fascinated by the show. Airing it twice weekly was a “bold new concept” and praised the producers and writers “for taking the adulterated trash of the original [novel] and making out of it, not only adult entertainment but also a program which, at 9:30, is not too gamey for the children.”

Amory was impressed with some members of the cast, notably Dorothy Malone and Ryan O’Neal, but wasn’t quite sure about Mia Farrow.

Notes from the Hollywood and New York TV Teletype columns this week:

Letters this week ranged from one praising CBS for its coverage of the Warren Commission Report to one asking for Mitch Miller to return to television during election season. There was also a letter pointing out a mistake in the September 26th issue regarding the “winningest” football coach and one from the California State Electronics Association applauding TV Guide‘s September 12th article about the price of good TV service. And there were more articles about new shows:

Thanks to NBC for Flipper, The Famous Adventures of Mr. Magoo, and Kentucky Jones. Saturday is one of the nights the kids can stay up and watch.
Mrs. INez Shaw
Spokane, Wash.

The Addams Family and The Munsters can go back to the graveyard.
Arthur Fox
Bethlehem, Pa.

Rounding out the national section was a four-page picture feature about Combat! faking a snow scene, a four-page Designer’s Choice article showcasing gowns by James Galanos modeled by actress Dana Wynter, and some humorous made-up TV plots by Jerry Buck.

It was another big sports week on television, with plenty of Olympics coverage as well as the end of the 1964 World Series. The listings section is filled with “Special Announcement” boxes advising readers that World Series games, if necessary, will pre-empt regularly scheduled programming. All the games were necessary and there were games on Saturday, Sunday, Monday, Wednesday, and Thursday. The St. Louis Cardinals won the series 4-3 over the New York Yankees. 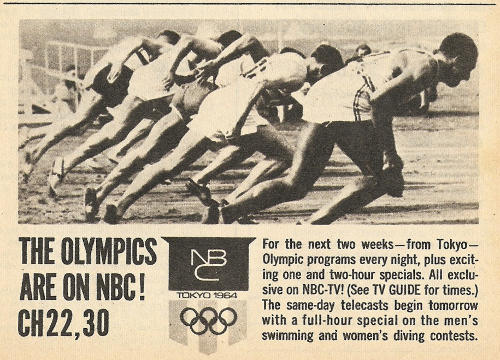 Advertisement for the Olympics on NBC – Copyright 1964 Triangle Publications, Inc.

NBC aired Olympic coverage every night of the week starting on Sunday with an hour-long special from 6:30-7:30PM. There were with highlights Monday through Friday from 11:15-11:30PM as well as specials on Tuesday and Thursday. The Sunday special included a recap of the opening ceremonies for those who hadn’t stayed up late to watch them live.

Other special programming during the week included reports on the British elections; a tribute to Eleanor Roosevelt (aired on three different stations, two on Sunday at different times and one on Monday); and a documentary titled “Berlin: Kaiser to Khrushchev” narrated by Richard Basehart that aired on four different stations.

There were only two TV Guide close-ups this week:

As an example of how difficult it has been to identify local programs, I noticed while flipping through the listings section that a new half-hour educational series called Family Living on WTIC (Channel 3). The premiere episode, “Television and the Family,” was about the problems of child raising. Was this a local WTIC series? I thought it might have been but eventually determined it was a syndicated series produced by the University of Michigan, hosted by Professor Robert O. Blood.

There were a number of local programs during the week, many of them on WWLP (Channel 22) in Springfield, MA and its satellite WRLP (Channel 32) in Northfield, MA. The station aired a 90-minute children’s program called Little Old Toymaker from 8:30-10AM on Saturdays. I don’t know anything about it other than the title. On Monday, October 12th from 4:30-6PM the station aired coverage of a Columbus Day Parade down Main Street in Springfield, with commentary from Sylvia Forestiere and Rollie Jacobs. It was not live. 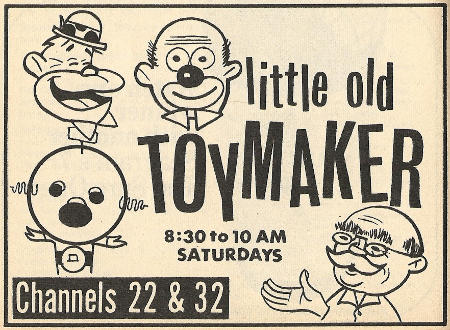 Plus there was the return of Schools Match Wits (also known as As Schools Match Wits) on WWLP/WRLP on Friday, October 16th from 7:30-8PM. The high school quiz show premiered in October 1961 and aired live. It is still on the air more than 50 years later, having moved to PBS affiliate WGBY in January 2007.

There was also a live football game between the Springfield Acorns and the Providence Steamrollers that same day on WRPO-TV (Channel 12) in Providence, RI.