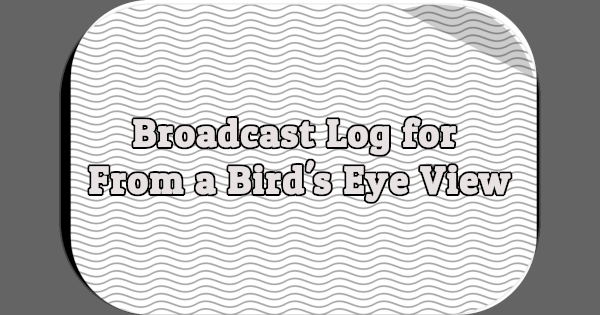 Here’s another show where most of the episode guides available online conflict with contemporary listings published in newspapers. From a Bird’s Eye View was a British sitcom created by Sheldon Leonard. The series starred Millicent Martin and Patte Finley as airline stewardesses–one British, one American–working in Europe.

A total of 16 episodes were produced. They originally aired in the United Kingdom from September 1970 through January 1971, with a final episode airing months later in April 1971. In the United States, From a Bird’s Eye View debuted on NBC on March 29th, 1971 and aired through July, with repeats continuing through mid-August.

The following is hopefully an accurate list of From a Bird’s Eye View‘s NBC run. I’ve checked listings in six different newspapers and all of them confirm that the 16 episodes aired on NBC from from April to July with one pre-emption in June followed by four weeks of repeats.

As always, I should stress that newspaper television listings are not always accurate. It is entirely possible NBC decided to pre-empt certain episodes and air them later in the season.

The episode “Family Tree” was originally scheduled to air on June 21st but was pre-empted for a special about Tricia Nixon’s wedding.