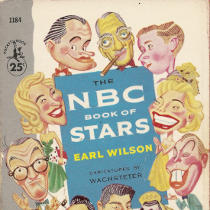 I was perhaps a little too proud of myself when I realized that I was familiar with all twelve of the NBC television personalities columnist Earl Wilson discusses in this 1957 book. A few of them, like Bob Hope and Groucho Marx, are names everyone should know. Many others, like Steve Allen, Dave Garroway, Gisele Mackenzie, and George Gobel, may not be as well-known today.

I’m sure most visitors to Television Obscurities recognize some or all of these names just as I’m sure many know a lot more about these people than I do. They were all very popular on television at one point so none of them are obscure personalities, although an argument could be made that some of them have slipped into obscurity due to the passage of time. I doubt many people born during the last three or four decades know who Gisele MacKenzie is unless they’re Canadian or interested in the history of television/music/pop culture. 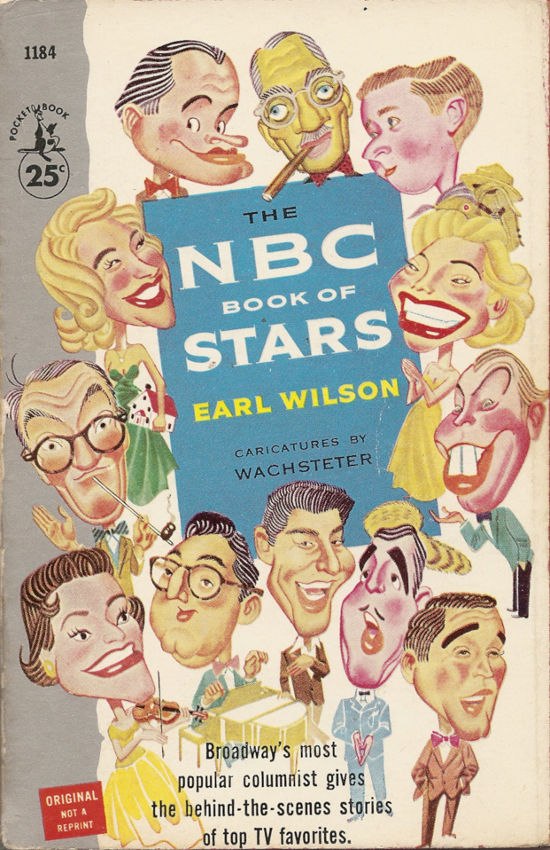 The very first page lays out the point of the book:

In The NBC Book of Stars, the frankness that has won Wilson thirty million readers gives you a unique and personalized introduction to your favorite TV stars.

Here is the first really fresh and intimate close-up of the celebrities everyone wants to know the truth about.

Author Earl Wilson is described as a “famed Broadway columnist” but that’s the only information provided about the author. Presumably, anyone buying The NBC Book of Stars in 1957 would’ve known who Early Wilson was so there was no reason to give background on him.

Wilson devotes a chapter to each personality and starts each chapter with a “vital statistics” section that covers details like name, marital status, parents, and career highlights. I thought perhaps there was a bit of sexism at play because Gisele MacKenzie’s height and weight were included (in Chapter 2) whereas those numbers were absent from Tennessee Ernie Ford (in Chapter 1). But then I discovered that Wilson also listed height and weight for many of the men as well as all of the women. Maybe Tennessee Ernie Ford was just embarrassed about his figure.

The chapters range in length from nine pages for Dave Garroway to over 20 pages for Steve Allen. Most of them are around 13 pages long. 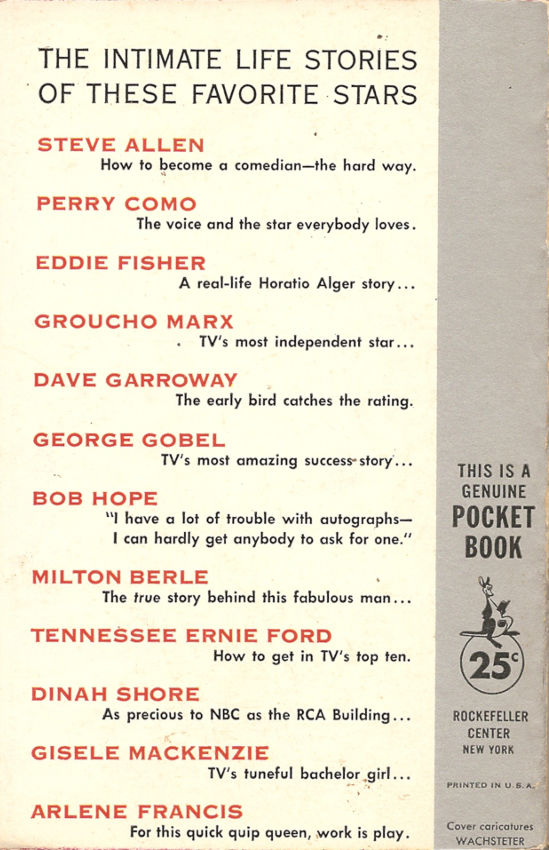 In several of the chapters, Wilson mentions sitting down to lunch with whoever he is profiling. He had lunch with Tennessee Ernie Ford at Mike Lyman’s restaurant in Hollywood, for example, ate lunch with Groucho Marx at the Absinthe House in New York City, and was invited to breakfast at Dinah Shore’s house. He also attended a party thrown by George Gobel and met Princess Margaret at a ball with Eddie Fisher.

In other words, the man was connected and was friendly with the people he wrote about. Perhaps that’s why there are no criticisms within the pages of The NBC Book of Stars. Wilson was also likely under strict orders to keep things light–NBC wanted publicity and promotion, nothing more.

That’s not to say the biographies aren’t interesting. They really are. Earl Wilson was able to write with authority about the early television work of Milton Berle because he watched it. He could discuss how Gisele MacKenzie’s career got started because he was around during her early days and also heard about her from Jack Benny. The conversations Wilson has may be interesting but what The NBC Book of Stars really offers is a vivid and specific view of NBC television during the 1950s.

I should point out that it’s entirely possible Wilson wasn’t always accurate with his dates and facts and he probably glossed over certain unsavory aspects here and there. I can’t see any scholarly use for it but I was never bored while reading The NBC Book of Stars.

For the record, the cover artwork and black-and-white caricatures of all 12 personalities were drawn by George Wachsteter.

4 Replies to “Bookshelf: The NBC Book of Stars”