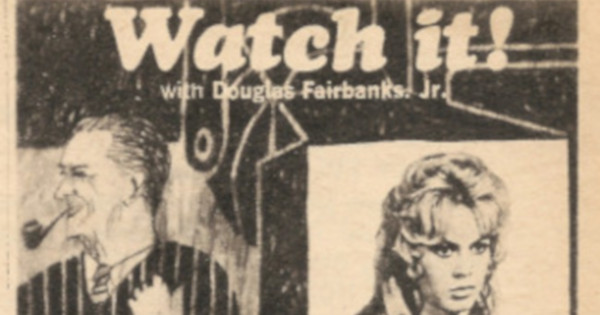 Although ABC originally announced it would broadcast four hour-long specials sponsored by Alcoa (the Aluminum Company of America) only two aired before the sponsor dropped the project. The first special was seen in January 1965. The second special, which this ad promotes, was broadcast on Sunday, March 14th, 1965 from 7:30-8:30PM. Douglas Fairbanks, Jr. hosted both specials, which gave viewers a behind-the-scenes look at the world of entertainment.

This particular ad is from the Western New England Edition of TV Guide. Channel 7 was WNAC-TV in Boston, MA; Channel 8 was WNHC-TV in New Haven, CT; Channel 20 was WATR-TV in Waterbury, CT; and Channel 40 was WHYN-TV in Springfield, MA.