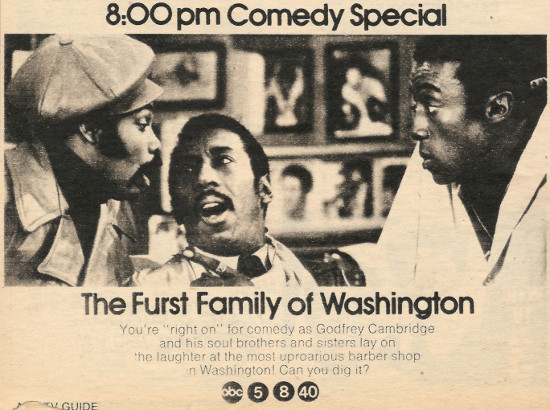 “The Furst Family of Washington” starred Godfrey Cambridge as Oscar Furst, who ran a barber shop in Washington, D.C. with his mother Eloise (played by Theresa Merritt), whose nickname was Mama. The barber shop also housed a gambling palor. Others in the cast were Theodore Wilson, Eddy C. Dyer, and Dewayne Jessie. ABC aired the pilot on Tuesday, September 11th from 8-8:30PM.

The network later reworked “The Furst Family of Washington” as That’s My Mama starring Clifton Davis and Theresa Meritt. It premiered in September 1974 and ran for 39 episodes over the course of one-and-a-half seasons.

For the record, The Paley Center for Media has a copy of the unsold pilot in its collection.

This particular ad is from the Western New England Edition of TV Guide. Channel 5 was WCVB-TV in Boston, MA; Channel 8 was WTNH-TV in New Haven, CT; and Channel 40 was WHYN-TV in Springfield, MA.

One Reply to “TV Guide Ad: The Furst Family of Washington”