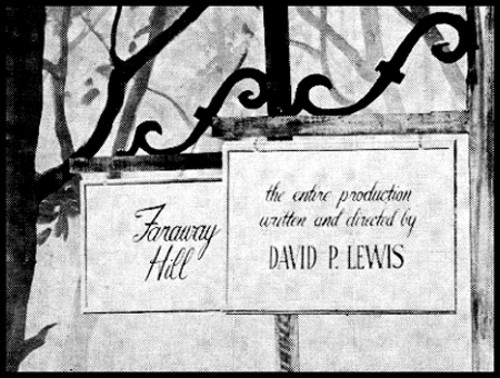 Sadly, almost nothing is known about Faraway Hill. Flora Campbell starred as Karen St. John. Recently widowed, she decides to move from New York City to the country to visit relatives. She falls in love a man (played by Mel Brandt) who was engaged to another woman. That’s pure soap opera melodrama, right? The name of Brandt’s character is unknown. In fact, no other character names are known.

The Caples Advertising Agency produced Faraway Hill. It had no sponsors. David P. Lewis served as writer and director. According to his 1992 obituary in the Los Angeles Times, Lewis based the series on an incomplete novel he wrote. Wikipedia claims the Lewis family owns the original scripts from the series.

I’ve tried researching Faraway Hill off and on over the years. There’s just no information out there. If the scripts do survive, I’d love to read them.

I have come across a handful of reviews. Here’s a review of the debut episode published in the October 19, 1946 issue of Billboard magazine [1]:

David P. Lewis, director of video for Caples, did a fairly good job in bringing soap opera to television and it may be the tip-off that this kind of show will have a place in television. With only a $300 budget per show, Lewis produced a serial that has good possibilities for holding femme attention during the afternoons. Altho show was weak in spots, mainly direction and acting, production as a whole was strong enough to hold its own.

Story was about the usual rich city gal who gets romantically and otherwise involved with a poor yokel, ending with gal becoming socially conscious. Flora Campbell, who took the lead, at first seemed a little lost but her confidence warmed up fast. Both she and her leading man, Mel Brandt, the yokel, handled their lines well. Both are telegenic.

For a video soap opera, there were too many characters in the first program. Fewer would have been less confusing, made for better scanning, and show would have been better.

Billboard published a followup review in its December 7, 1946 issue [2]:

Episode eight of Faraway Hill shows little improvement after eight weeks. At the start, this soapie appear to have possibilities of developing into an interesting television cliff-hanger, but production has taken a nose-dive.

Altho David P. Lewis, video director of Caples Ad Agency, has assembled a fairly good cast, production is amateurish and strictly on the hammy side. In addition, show is badly directed.

Story concerns a Park Avenue gal who goes to visit her country shirttail relations and unhappily discovers that they’re not in the 400. While on the farm she falls in love with the hired man who in turn falls in love with the farmer’s daughter. Up to this point, she has tried every conceivable trick known to the fem trade to win her man–but to no avail. And she’ll proably [sic] go on trying as long as Caples foots the bill.

Lewis has one neat trick of bringing viewers up to date on story. Show opens with several scenes from previous episodes, then fades into title card and intro of main characters.

Finally, here’s a lengthy review from the December 1946 issue of Television magazine [3]:

“Faraway Hill” is one of the first attempts to put on a regularly scheduled television soap opera. Written and produced by David Lewis of the Caples Company as an agency-sustained show, it has all the elements of let-the-soap-chips-fall-where-they-must drama with heartbreak, love, noble rejection, death, gossip, and plenty of eternal triangle.

The seventh chapter opened with a rustic sign carrying the name “Faraway Hill” and camera then cut to central character, Karen St. John, who with tear-filled eyes reviewed the action of the previous chapters in a manner which successfully projected her character, and brought the viewing audience up to date with the latest crises. At this point the camera once again picked up the rustic sign, but this time names of the rest of the cast were flashed across it. As each name appeared an off-stage voice established the identity and relationship of these other characters. Well-timed musical chords added proper mood here.

The half-hour play moved through its scenes with a liberal serving of emotionalism which should satisfy the vast segment of the female populace who enjoy a good cry. The ability of the actresses to televise their tear-filled eyes certainly added enchantment for people who react tear-for-tear.

In this seventh chapter there were several scenes among which were the farmhouse kitchen, country church, and one on top of a hill with a well-painted backdrop of the distant valley, and surrounding hills. This backdrop had the farmhouse where most of the action took place painted on it. This was cleverly utilized when action switched from hill to farmhouse kitchen by having the camera sweep down the valley to a close-up of the house, and then into the farmhouse kitchen. Other visual devices were close-ups of a clock, and calendar to establish time passage. Good use was made of off-stage narration and bits of mood music to explain and heighten the psychological interplay of the tearful triangle. At the point where you felt the soap bubble was about to burst, a card appears proclaiming “Continued Next Week.”

(Curiously, the first Billboard review of the first episode is said to be based on the Wednesday, October 9th broadcast–but that’s a week after every other source says the series debuted.)

The number of viewers for the series was in the hundreds. I wonder if anyone who watched the series in New York City or Washington, DC are still alive?

The final episode of Faraway Hill aired on December 18th, 1946. According to his obituary, Lewis wrote the end of the series into that last episode. Could that make it the first TV show to actually have an ending?

Faraway Hill came and went prior to the introduction of the kinescope for recording live TV in September 1947. While it’s true experimental recordings started earlier in the 1940s, it’s doubtful any of Faraway Hill was recorded and even less likely any footage still survives today. It’s possible photographs taken from a TV screen could exist. Audio recordings, too. But I doubt it.

An image of the title card for the series–mentioned in some of the reviews–was added to the Wikipedia entry for the series in June 2015. It is credited to the Lewis Family Collection but said to be in the public domain. I’ve included it earlier in this post.

The February 28th, 2006 episode of Jeopardy! featured a clue about Faraway Hill (in the “S”-ENTIAL KNOWLEDGE category). One of the contestants rang in with the correct answer.