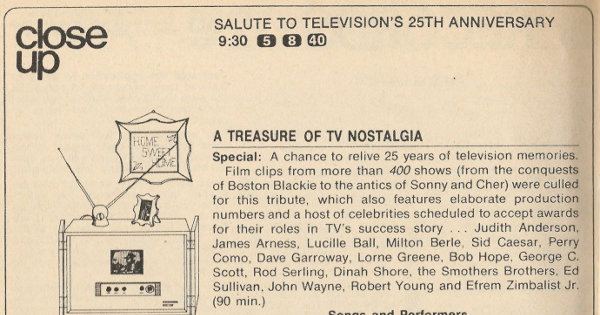 For the purposes of “Salute to Television’s 25th Anniversary,” ABC determined the birth of television occurred in 1947. Not having seen the special, I can’t say if an exact date was specified. The Close-Up claims the special featured clips from over 400 shows. I wonder how many of those clips were from 1947…

Although the Close-Up doesn’t say it, Zenith sponsored the special. It’s full title is apparently “Zenith Presents A Salute to Television’s 25th Anniversary.”

This particular Close-Up is from the Western New England Edition of TV Guide. Channel 5 was WCVB-TV in Boston, MA; Channel 8 was WTNH-TV in New Haven, CT; and Channel 40 was WHYN-TV in Springfield, MA.