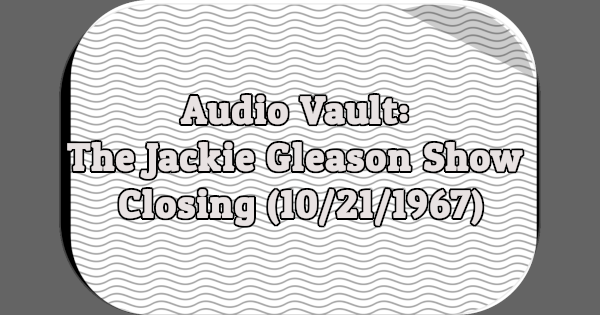 Here’s audio from the closing credits to the October 21st, 1967 episode of The Jackie Gleason Show on CBS:

A voiceover during the closing credits promotes two programs, one local and the other network. The first is a syndicated documentary called “A Nation of Immigrants.” Produced by David Wolper Productions and sponsored by Xerox, the documentary was based on President John F. Kennedy’s book of the same name. It aired on stations across the country throughout October 1967.

The second program is a repeat of the 1966 animated special “It’s the Great Pumpkin, Charlie Brown.” CBS rebroadcast the special on Thursday, October 26th, 1967.

Witness the hope and courage that built a nation of immigrants tonight at nine. This story of the American melting pot, narrated by Richard Basehart, with a prologue by Senator Robert Kennedy. Join them tonight for “A Nation of Immigrants,” tonight at 9 here on TV2.

Hark, what true light breaks? Is it the sun? is it the moon? No, it looks more like jack-o-lantern. But actually “It’s the Great Pumpkin, Charlie Brown.” In a happy Halloween special. See it, Thursday night, in color.