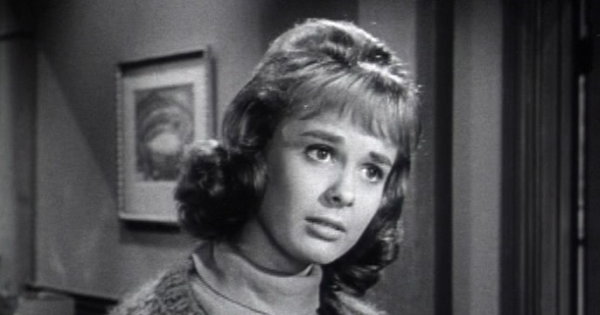 Karen aired as part of 90 Bristol Court, a sitcom block on NBC during the 1964-1965 season. It and two other sitcoms (Harris Against the World and Tom, Dick, and Mary) were set at the same apartment complex. Karen starred newcomer Debbie Watson as 16-year-old Karen Scott. The theme song, performed by the Beach Boys, describes her as “alarming but disarming and a really very charming modern girl.”

Karen receives an expensive charm bracelet in the mail but has no idea who sent it to her. She doesn’t know her parents bought it for her as a reward for a B+ average. Karen’s friend Candy assumes it came from an adult because of the sloppy inscription (“To Karen, A Very Sweet Girl”). She becomes obsessed with figuring out who Karen’s secret admirer is.

Candy soon becomes convinced the bracelet came from their French teacher. She starts fantasizing about Karen marrying him and becoming Mrs. Seymour Dumont. But Karen isn’t so sure. The two realize they can go to the jewelry store where the bracelet was purchased and ask who bought it.

The jeweler recognizes the bracelet but insists he can’t tell them because it was supposed to be a surprise. He inadvertently confirms their suspicions about Mr. Dumont with his hints about the identify of the mystery buyer.

Karen grows increasingly worried about Mr. Dumont and decides to return the bracelet. He’s too old for her and a teacher.

Karen: “Besides, I’m too young to get serious about anybody. I have to finish high school and then college. I want to have the fun of dating a lot of boys and going to parties and wearing pretty dresses. I don’t want to miss all those things, Candy.”
Candy: “Gee, Karen. Ingrid Bergman made that same speech in an old movie on TV. And the next thing she became a nun.”

Karen wants to call Mr. Dumont and tell him but Candy says she has to do it in person. It’s wrong to break a man’s heart over the telephone, after all. Candy suggests Karen meet Mr. Dumont at a fancy restaurant called the Blue Robin. Seeing her at such a sophisticated place will make him realize Karen is too young for him.

Meanwhile, Mr. Scott stops by the jewelry store to pick up Karen’s bracelet, only to learn was sent out that morning. The jeweler tells him about Karen’s visit. Mr. Scott assumes his daughter knows he bought her the bracelet.

Mr. Dumont agrees to meet Karen at the Blue Robin. The maitre d’ isn’t happy to see an older man meeting with a young girl and makes several sarcastic remarks. Karen stumbles her way through letting Mr. Dumont down easy before he tells her he didn’t send her the bracelet.

Karen returns home in tears, confusing her parents. They rush upstairs to talk to their daughter. Karen tells them about what happened with Mr. Dumont. They assure her everything will be okay. Karen finally learns the truth about the bracelet and is happy that her father bought it for her.

Her joy turns to anger, however, when she realizes Candy is the blame for her emotional turmoil over the bracelet. She vows never to talk to Candy again.

There’s a minor subplot involving Mimi that has nothing to do with the bracelet. One of her friends, spoken about but never seen, had to ride to school in her father’s bakery truck and found the whole thing so embarrassing she refused to get out. Mimi also finds out about the bracelet.

Mimi: “Did Karen get her bracelet yet?”
Barbara: “How do you know about that bracelet?”
Mimi: “Well, since Dad took the TV out of our room, I do a lot of snooping.”
Barbara: “Karen’s bracelet is supposed to be a surprise.”
Mimi: “Oh, I didn’t tell Karen. I only tell her the bad stuff. I never tell her anything she’s going to be happy about later.”

Mimi later insists that as a member of the family, she’s entitled to know what’s going on. That’s why she listens to phone conversations. The threat of her father finding out about her habit gets her to promise to stop.

As someone who grew up watching television in the 1990s and early 2000s, it was hard to watch “Who’s Seymour?” without rolling my eyes a little at how corny it is. I’ve used the word harmless several times before to describe sitcoms from the 1950s and 1960s. It certainly fits Karen, which from the two episodes I’ve seen was an inoffensive, light family comedy.

Candy’s enthusiasm for a potential relationship between Karen and Mr. Dumont teacher might be unsettling if the whole thing wasn’t so silly. Karen apparently doesn’t think there’s anything inherently wrong with dating her teacher; she just doesn’t want to give up dating other boys to settle down with Mr. Dumont.

At least the maitre d’ is disturbed that Mr. Dumont is meeting Karen for dinner. He goes to great lengths to point out how young Karen is and how old Mr. Dumont is. Twice, the maitre d’ pointedly refers to her as “little girl” and offers to bring her a children’s menu.

Mr. Dumont’s reaction after learning that Karen thought he as her secret admirer is subdued. He apologizes for the misunderstanding, tells her if he ever has a daughter he hopes she’ll be just like Karen (only less imaginative), then reveals he’s engaged.

Debbie Watson spends most of the episode either shocked or worried. I think she smiles exactly once. Karen often has her head tilted to one side, pondering the complexities of her teenage life. Candy, on the other hand, is far too excitable to ponder anything.

By the time this episode aired, NBC had cancelled the other two-thirds of 90 Bristol Court. Only Karen lasted the entire 1964-1965 season.

When Karen bursts into tears and runs to her bedroom, her father wryly wonders if her charge account at the malt shop was cut off. Did malt shops really offer charge accounts to teenagers in the 1960s?

Were you a fan of 90 Bristol Court and/or Karen? Do you remember watching this episode back in 1965? Hit the comments with your thoughts.