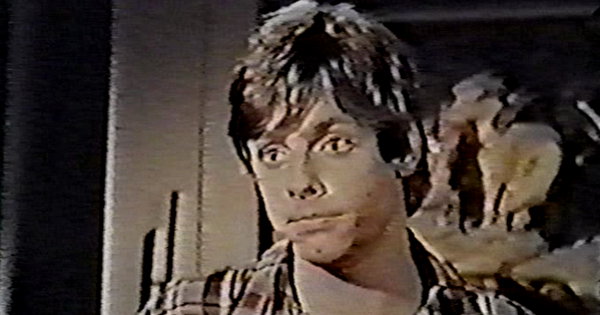 MTM Enterprises produced several big hits in the 1970s, including The Mary Tyler Moore Show and The Bob Newhart Show. The Texas Wheelers was one of the company’s flops. Set in a rural Texas town, the sitcom focused on the four Wheeler children and their drunk, lazy father who returns unexpectedly and tries to insert himself back into their lives.

Jack Elam starred as Zack Wheeler, the father. Gary Busey and Mark Hamill played the oldest Wheeler children. Rounding out the cast were Karen Oberdiear and Tony Becker as the younger children. Barely a month into the 1974-1975 season, ABC cancelled The Texas Wheelers after just four episodes had aired. The network burned of four additional episodes during the summer of 1975, leaving five of the 13 produced episodes unaired.

Learn more about The Texas Wheelers by reading my Spotlight about the show.

The episode opens with the family waking up on a Wednesday morning. Youngest child T.J. doesn’t want to go to school. He says his hand hurts where the family pig bit him the day before. Truckie and Doobie, with the help of their father, convince him to go to school. Truckie and Zach then discuss the $50 they owe the doctor. Zach offers to sell his so-called heirloom pocket watch. He’s convinced he can get $60–even though the watch only runs for three minutes at a time.

Truckie drives Zach around town hoping to find a buyer. He eventually manages to sell it to a junk store. But the woman behind the counter will only give him $30 for it. Zach watches with interest as a horse collar is sold for $70. He decides he can make money selling the family’s junk.

With the help of his children, Zach sets up an open-air antiques market outside the house. Truckie and Doobie aren’t convinced their old junk from the barn will sell. Zach has hope, however. But when the first customers–Mr. and Mrs. Klate–want a rocking chair and there isn’t one for sale, Zach takes them inside the house. He offers to sell them the rocking chair the family still uses.

Mrs. Klate spies a music box on the mantle. It plays the William Tell Overture. Zach happily sells it and the rocker and a velvet picture of Hawaii. Truckie points out that the music box belonged to Boo. She loves it. He gave it to her when she turned six. Losing it will break her heart. Zach promises to track down the couple who bought the music box and get it back.

Unfortunately, the Klates had checked out by the time Zach got to their motel. He returns home empty handed. Truckie forces Zach to tell Boo about the music box right away rather than wait until morning. To the surprise of everyone, especially Truckie, Boo doesn’t remember the music box. Truckie reminds her it was a birthday present and she admits she loved it when she was six, but that was a lot of birthdays ago.

Truckie and Zach continue arguing. Doobie tells them to stop fighting. They should be glad Boo’s heart isn’t broken. But the two can’t seem to see eye-to-eye about anything. Zach tells Truckie that one day he’ll learn not to assume kids feel the same way their parents do. Of course, Zach himself hasn’t quite learned that lesson yet.

The next day, Boo demands part of the money from the sale of the music box and Zach gives her some. He thinks her request is proof she’s a Wheeler just like the rest of the family.

Truckie: “What do you got? You got Mom’s buffet table. You got Doobie’s bronze baby shoes. I don’t like this stuff laying out here in the yard. It’s like we evicted ourselves or something.”

Doobie: “Hey, I just sold the Victrola and all them back issues of National Geographic.”
Zach: “You didn’t sell the ones on Africa, did you?”
Doobie: “Well, yeah.”
Zach: “Damn!”
Doobie: “Well, shoot, I made eight bucks.”
Zach: “That’s all?”
Doobie: “That and Marilyn’s phone number.”

“The Music Box” is the only episode of The Texas Wheelers I’ve seen. Unfortunately, the quality of my copy is quite poor. Nevertheless, I enjoyed watching it. I appreciated the lack of laugh track. It gave the humor a chance to sink in. Although to be honest, it wasn’t all that amusing.

Jack Elam does a fine job as the cantankerous patriarch of the Wheeler clan. His wild eyes and gravely voice give the character a tough appearance. Elam manages to soften the rough edges at times, like when Zach realizes he may have broken his daughter’s heart. But soon enough he’s trying to squirm out of telling her that he sold the music box.

It’s Gary Busey who shines here. Having looked out for his younger siblings after Zach abandoned them, Truckie feels responsible for them. He wants what’s best for them and he doesn’t trust his father to do the right thing. But he’s not the parent. He doesn’t have all the answers.

When he’s proven wrong about Boo being distraught about the music box, Truckie doesn’t know what to do. He refuses to back down and lashes out at his father. I’m curious to know how their relationship would’ve progressed had the series succeeded.

Mark Hamill has little to do in this episode, sadly. Like Truckie, Doobie wants to help raise Boo and T.J. but he’s not as mature as his older brother. He seems more interested in girls than anything else. Karen Oberdiear, as Boo, spends nearly as much time brushing her hair as she does speaking. And Tony Becker pretty much disappears after the first scene.

It’s impossible to judge a TV show after viewing just one episode. But if “The Music Box” represents a typical installment of The Texas Wheelers, I’d love the opportunity to watch additional episodes.

My copy of “The Music Box” features an ABC promotional spot for The Streets of San Francisco. It also includes commercials for Close-Up toothpaste, Datsun, Fritos, Kodak (with Mark Hamill), and Cheerios.

The name of the junk store is Funky Junk.

The Texas Wheelers is not available on any format. Check YouTube for a few clips.

Did you watch The Texas Wheelers on ABC during its brief run in the fall of 1974 or when it returned in the summer of 1975? Do you remember this episode? Hit the comments with your thoughts.

4 Replies to “Retro Review: The Texas Wheelers – “The Music Box””