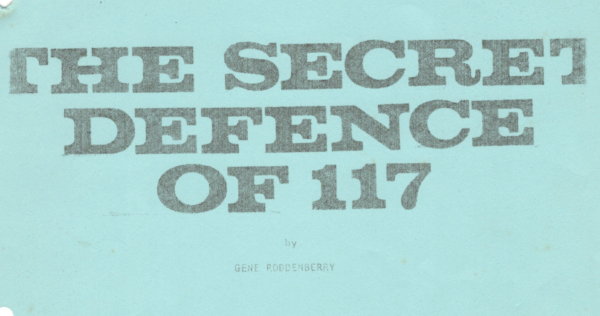 Years ago, I wrote about a “lost” television episode written by Star Trek creator Gene Roddenberry. Titled “The Secret Weapon of 117,” it first aired in syndication in March 1956. Viewers may have seen the episode while watching Stage 7, Chevron Hall of Stars, or Don Ameche Presents, depending on where they lived and the regional sponsor in their TV market. The last known broadcast came five years later in April 1961. The episode then seemingly disappeared. Roddenberry supposedly sold copies of the script through his Lincoln Enterprises company.

Earlier this year, Michael contacted me with the news that he had a copy of the script. His wife found it at an estate sale in Virginia in 1996, part of a larger collection of scripts and material from various Roddenberry projects (including the unsold pilot “Genesis II” from the early 1970s). Michael’s copy of the script is dated December 1953 and bears the title “The Secret Defence of 117” (note the British spelling).

Curiously, the script is also marked “FOUR STAR THEATER,” which is most likely a typo. Four Star Playhouse, produced by Four Star Productions, aired on CBS from 1952 to 1956. Four Star later produced syndicated dramatic anthology series Stage 7, which aired in parts of the country as Chevron Hall of Stars and Don Ameche Presents.

Click on one of the thumbnails below to view the cover, title page, and first page from Michael’s copy of “The Secret Defence of 117” script:

Did Roddenberry write “The Secret Defence of 117” in 1953 as an potential installment of Four Star Playhouse? Why did it take so long for the script to be filmed? Most importantly, does a copy of the episode, broadcast under the title “The Secret Weapon of 117,” still exist?