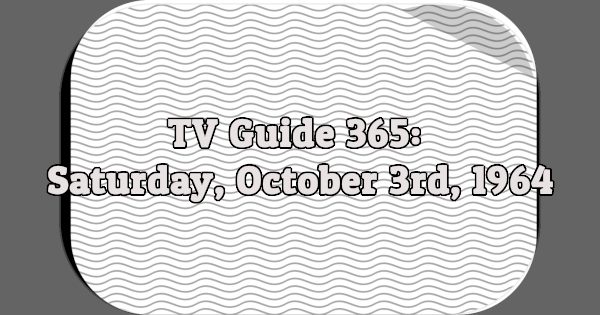 7:30 JACKIE GLEASON (CBS)
The Great One comments on topless bathing suits, vitamins, quiz shows and school dropouts. Barbara Heller introduces the sketches: Rum Dum’s all-out war with a ketchup bottle; a child psychologist’s solution to a familiar problem; and the Poor Soul’s difficulties in hiding the combination to his safe. Reggie Van Gleason appears as the Human Electrode. Frank Fontaine visits Joe the Bartender to give his version of how the West was won and sings “If I Had My Way, Dear.” (60 min.)

OUTER LIMITS (ABC)
“Keeper of the Purple Twilight.” An inquisitive creature from another world doesn’t know what emotions are and so makes a deal with research scientist Eric Plummer: It will exchange some valuable formulas for Eric’s ability to experience feeling. Script by Milton Krims from a story by Stephen Lord. (60 min.)

8:30 GILLIGAN’S ISLAND (CBS)
The marooned inhabitants start thinking about some permanent form of shelter, and they set out to build a communal hut to serve as living quarters.

LAWRENCE WELK–Music (ABC)
Maestro Welk salutes the World Series. Highlights include “Take Me Out to the Ball Game” and “Batter Up, Batter Up, Play Ball.” Aladdin recites “Casey at the Bat.” (Live; 60 min.)

10:00 GUNSMOKE–Western (CBS)
Cyrus Deglar takes a bullwhip to Quint, just to warn him to stay away from his daughter Susan. (60 min.)