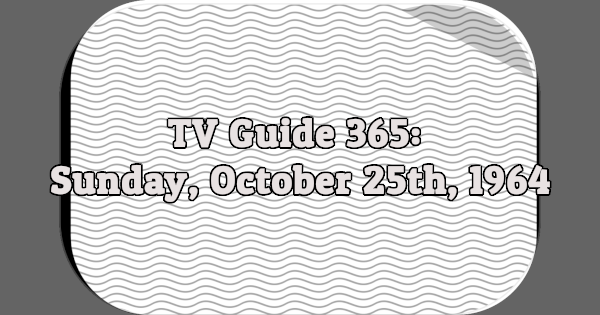 6:30 SUMMER OLYMPICS (NBC)
[SPECIAL] Scheduled: a review of the outstanding performances, interviews with athletes and coaches, final team standings and a preview of the 1968 Mexico City Olympics. (60 min.)

MISTER ED–Comedy (CBS)
Ed digs a “Tunnel to Freedom” when Wilbur punishes him by locking him in his stall.

7:00 LASSIE–Drama (CBS)
Young Jim Shelley is the least competent worker on a Forest Service crew working on an erosion project, so he’s a bit surprised when Corey asks his help.

7:30 WALT DISNEY’S WORLD (NBC)
[COLOR] “The Tenderfoot,” second of three shows. Hoping to make some money in a hurry, Tevis and his greenhorn friends set out to capture a herd of wild mustang. (60 min.)

9:00 BONANZA (NBC)
[COLOR] “The Scapegoat.” Waldo Watson, who has bungled two suicide attempts, is about to try again–by jumping off a cliff–when Hoss intervenes. (60 min.)

MOVIE (ABC)
Sunday Night Movie: “Geronimo!” (Mexican-American, 1962) In 1883, Apache leader Geronimo heads for Mexico and reverts to banditry when he finds that his people are being cheated out of some land that was promised to them. (One hour, 55 min.)

9:30 JOEY BISHOP–Comedy (CBS)
Joey and Jan Murray, who appears as himself in this episode, are going to put on a comic boxing match for the boys’ club. It’s supposed to be all in fun–so why is Jan training so hard?

CANDID CAMERA (CBS)
The camera watches a little girl helping herself to as many candied apples as she can carry; a manikin on a busy street corner losing its skirt; a joke in a store changing as it passes from one customer to another; and a man assigned to bend pretzels who finds the dispensing machine is working too fast. Durward Kirby and Allen Funt are the hosts.