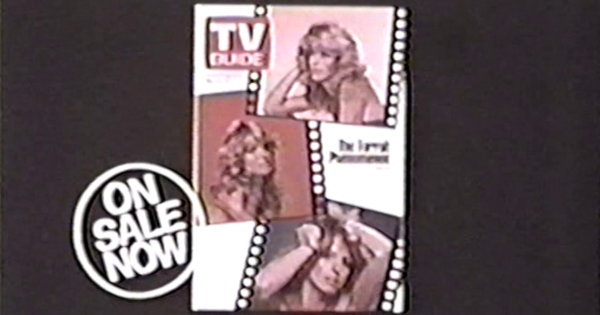 Launched in 1953, TV Guide magazine was once essential reading for tens of millions of TV viewers every week. Relive the glory days of TV Guide by watching an assortment of commercials, broadcast on local stations during the 1960s, 1970s and 1980s.

A Brief History of TV Guide

In the early 1940s, when broadcast television was still young, television stations mailed out weekly programming schedules on cards to the limited number of households owning television sets. Television listings were also often found in newspapers. By the late 1940s, many larger markets saw the development of magazines devoted exclusively to television listings, including TV Guide in New York City, TV Forecast in Chicago and TV Digest in Philadelphia. In April 1953, Triangle Publications launched a national TV Guide magazine after buying the three aforementioned local magazines and at least six others [1], [2].

The inaugural issue of TV Guide was published on April 3rd, 1953. On the cover was Desi Arnez, Jr., newborn son of popular television personalities Lucy and Desi Arnez. During the first six months of 1954, TV Guide was selling an average of 1.6 million copies per issue on the newsstands (not counting subscriptions) [3]. Despite this success, in March 1955 there were still roughly 80 other television magazines being published, excluding the 31 local editions of TV Guide [4].

By 1967, TV Guide was bartering roughly $4 million worth of advertising space within its pages (it had a circulation of 12.5 million at that time) in return for local airtime [8]. A decade later, now selling some 20 million issues a week, TV Guide used over $11 million worth of advertising time for free and was printing advertisements for local stations in roughly 100 local editions [9].

Here’s an example of the voice over used to promote the June 26th-July 2nd, 1976 issue:

This week TV Guide takes camera in hand to cover Mary Tyler Moore’s mission to Moscow. She headed east to tape a show celebrating the renowned Bolshoi Ballet’s own bicentennial. The story, in words and pictures, in TV Guide magazine.”

During the 1980s, the rising popularity of cable television began to threaten TV Guide‘s dominance. When Rupert Murdoch’s News Corporation agreed to buy TV Guide in 1988, circulation was down to roughly 17 million [12].

Listing the programs shown on broadcast television during the 1960s and 1970s was one thing, but with tens of millions of households wired for cable — and dozens of cable systems operating nationwide — competitors to TV Guide such as The Cable Guide began popping up, focusing solely on cable systems [13]. In September 1989, in an effort to boost circulation, TV Guide spent $10 million on an ad campaign featuring 30-second commercials to air for five weeks on the broadcast networks, including FOX, plus local stations and cable television [14]. More spots were aired in 1990 and 1992 [15], [16].