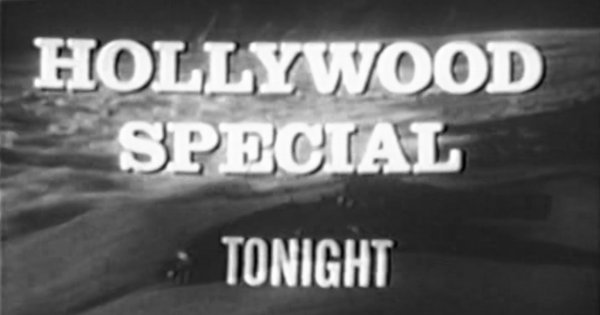 Less than a year after the debut of the NBC Saturday Night at the Movies, ABC introduced network TV’s second regularly scheduled weekly movie series, Hollywood Special, in April 1962.

In September 1961, NBC Saturday Night at the Movies became the first weekly prime time network television series to feature post-1948 movies from a major film studio. The movies shown on NBC Saturday Night at the Movies came from Twentieth Century-Fox. Previously, only movies produced prior to 1948, movies from smaller producers (B movies) or foreign movies were shown on television. By December 1961, there were rumors that ABC was in talks with Metro-Goldwyn-Mayer to air movies from that studio on Sunday nights [1].

In mid-January 1962, The New York Times reported that ABC was canceling two of its Sunday programs — Bus Stop and Adventures in Paradise, currently airing from 9-11PM — and would replace them on April 8th with a movies purchased from United Artists Associates [2]. It was suggested that the network might decide to move Lawman to 10:30PM and start the movies at 8:30PM.

A package of fifteen movies had been purchased; nine repeats would give ABC twenty-four weeks worth of programming. According to The New York Times, thirteen movies had been chosen already, including Witness for the Prosecution, Johnny Concho, Shake Hands with the Devil, Run Silent, Run Deep, The Wonderful Country and The Pride and the Passion. Stars featured in these movies included Clark Gable, Frank Sinatra, Gary Cooper, Kirk Douglas, James Cagney, Gregory Peck and Sophia Loren. ABC would be allowed to pick the final two from Trapeze, Moby Dick, Not as a Stranger and Vera Cruz.

The movie night would be called Hollywood Special. Broadcasting reported on February 2nd that when the series premiered in April it would mark the introduction of standalone 30-second commercials [3]. Previously, 30-second commercials had only been seen back-to-back featuring different products from the same advertiser. With Hollywood Special, ABC was offering commercial breaks running two minutes long and when tobacco company Brown & Williamson purchased 90 seconds, Lestoil stepped in to buy the remaining 30 seconds.

In early March, Broadcasting reported that co-sponsorship in Hollywood Special had been purchased by Edward Dalton, International Latex and Schick Safety Razor [4].

ABC had enough faith in its new movie venture that in late March the network purchased another 31 movies from United Artists to be used during the 1962-1963 season [5]. Some of those films would be shown in color as part of ABC’s entry into colorcasting that would also include The Flintstones and Mattie’s Funnies with Beany and Cecil [6].

Nationally, the first Nielsen report for July 1962 (which covered the two weeks ending July 8th) showed Hollywood Special airing on 135 stations and ranked ninth based on total audience, meaning homes viewing at least six minutes, but outside the top ten based on average audience [8]. That suggests viewers were more than willing to tune in for portions of movies but didn’t want to sit through the entire two hours. For the record, the two movies shown on Hollywood Special during this period were Ten Seconds to Hell on July 1st and Johnny Concho on July 8th.

The 15th installment of Hollywood Special was broadcast on July 15th. For the next nine weeks, ABC broadcast repeats, the last of which aired on September 16th. The following week, the new season of ABC’s Sunday movie premiered with a new title. Although an Associated Press article discussing the upcoming season referred to it as Hollywood Special, a list of premiere dates published in The New York Times on September 9th called it Sunday Night Movie [9, 10].

(Television listings in a number of newspapers, newspaper advertisements and articles in industry publications all referred to the series as The Sunday Night Movie.)

The first movie shown was The Big Country, a 1958 Western starring Gregory Peck. It was broadcast in color as part of ABC’s very first night of color programming (the premiere of The Jetsons at 7:30PM kicked off the network’s colorcasting).

ABC cancelled The Sunday Night Movie after the 1962-1963 season. Thomas W. Moore, ABC-TV vice president, explained “we think we ought to create our own product. Movies create very little viewer habits and it is difficult to maintain audience levels from week to week” [11]. However, the network reversed its decision in March 1963, purchasing a new package of 30 movies produced between 1958 and 1962 from United Artists [12]. The second incarnation of The Sunday Night Movie would air from 9-11PM. At some point in the late 1960s it was retitled The ABC Sunday Night Movie. The movie night would remain on the network’s schedule through the 1997-1998 season.

13 of the 15 movies aired as part of Hollywood Special were later syndicated to local stations as part of a post-1948 package of 33 movies offered by United Artists Associates, released years earlier than the company had planned due to strong interest from stations [13].

(A broadcast log for Hollywood Special can be found here.)