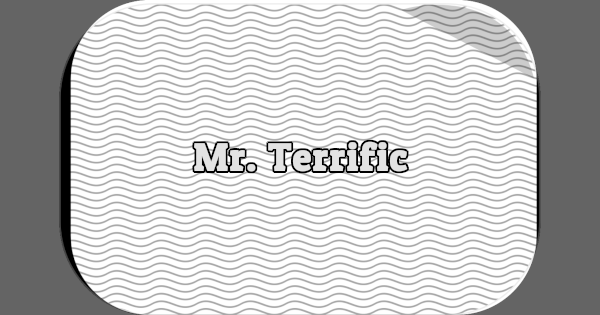 Mr. Terrific followed the (mis)adventures of Stanley Bemish, who after popping a Power Pill received an hour’s worth of super powers. CBS aired 17 episodes during the 1966-1967 season.

Stephen Strimpell starred in Mr. Terrific as Stanley Beamish, a gas station attendant in Washington, D.C. who moonlighted as a super powered crime fighter for the Bureau of Special Projects. The Power Pill, invented by Dr. Ned Reynolds (played by Ned Glass), could bestow the power of flight, super strength and invulnerability, but it only worked for an hour. Booster pills provided additional ten minute bursts.

Poor, gentle Stanley was the only man the Bureau could find for whom the Power Pill worked its wonders. So, the head of the Bureau, Barton J. Reed (played by John McGiver), decided to enlist his help in fighting crime. Unfortunately — and predictably — the Power Pill would wear off just when Stanley was in the thick of things. Dick Gautier played Hal Waters, who co-owned the gas station with Stanley.

Fresh from his role as Wilbur Post in Mister Ed, Alan Young starred in the original pilot episode for Mr. Terrific, produced by Universal Television. In this version, Stanley Beamish was a shoe salesman. CBS considered Mr. Terrific for its 1966-1967 schedule. In its February 7th, 1966 issue Broadcasting wrote that the pilot was among those “considered hottest prospects by agency men, who said they based their judgment on advance information” from CBS [1].

I have been searching for this answer for a while. I remember when I was little, early 60’s, a television show that started out with a cartoony introduction about a man, while searching for a cure for the common cold, produced a pill that gave him powers. What was this television show?
Dewey

Several weeks later, on February 21st, Broadcasting reported that it was one of six pilots for CBS “with more than a good chance” [2]. For some unknown reason, however, CBS decided not to move forward with the Alan Young Version. On September 12th, Broadcasting revealed that Stephen Strimpell had replaced Young and that the network now planned to use the show during its 1967-1968 season, although it could be rolled out earlier if needed [3].

Filming on a new pilot with Strimpell began September 19th [4]. On October 3rd, Broadcasting reported that CBS executives were “enthusiastic” about the pilot and had ordered additional episodes [5]. In its October edition, Television Magazine listed Mr. Terrific as a possible mid-season replacement for CBS [6]. Val Adams, in a November 13th article in The New York Times, wrote that Mr. Terrific would be replacing Run, Buddy, Run beginning Monday, January 9th, 1967 [7].

Mr. Terrific would follow Gilligan’s Island and compete with I Dream of Jeannie on NBC and Iron Horse on ABC. Reviews for the most part were negative, with Larry Williams of the Memphis Commercial Appeal calling it “abominably silly” while Hal Humphrey of The Los Angeles Times writing that “the laugh track was overdone and Stanley will need more than his silver cape to keep him aloft on the rating scale” [8]. The Washington Evening Star‘s Bernie Harrison called it “strictly on the pre-school age level” and George Gent of The New York Times opined that it was “nothing less than a disaster” [9].

One slightly more positive review came from Harry Harris, who wrote in the Philadelphia Inquirer that the series was “more amusing [than Captain Nice], though hardly hilarious” [10]. Critics who jointly reviewed Mr. Terrific and Captain Nice were almost uniformly more impressed with Captain Nice. For example, Bettelou Peterson wrote in the Detroit Free Press that “Terrific is Terrible. Nice is Nicer” [11]. On the other hand, The Indianapolis Star‘s Julia Inman suggested that “Mr. Terrific shows some possibilities. Captain Nice was just plain bad” [12].

Broadcasting suggested that its “favorable timeslot” could have something to do with the early success of a “show that didn’t seem to hold much appeal when screened as a pilot” [15]. Nationally, the first two episodes averaged a 24.5 Nielsen rating, placing 14th for the two-week period ending January 22nd [16]. The next two episodes dropped to 27th for the two-week period ending February 5th [17]. The strong showing didn’t keep CBS from canceling Mr. Terrific when it announced its 1967-1968 schedule on February 22nd. A total of 17 episodes were broadcast. The final first-run episode aired on May 8th with repeats continuing through August 27th.

According to The New York Times, despite being “one of the more successful midseason programs” CBS “apparently felt that the series had reached its peak audience with the children and was not likely to pick up steam” [18]. In other words the show simply skewed too young. For the 1966-1967 season as a whole Mr. Terrific ranked 36th with a Nielsen share of 30.2. It beat out shows like Gilligan’s Island, The Fugitive, Star Trek and both installments of Batman (due to Nielsen quirks some of these shows drew a larger share of the audience but had a lower rating) [19].

Said Arnold Becker, Director of Audience Measurement for CBS, “everyone knows they want Lucy back. Everyone knows the shows at the bottom of the ratings are going off. It’s the marginal shows–the Mr. Terrifics of the world–we quibble about” [20].

Mr. Terrific was never syndicated, aside from a made-for-TV movie titled The Pill Caper that was edited from four individual episodes. The series was reportedly very popular in Germany and all 17 episodes were released on DVD in that country on in July 2009. Included was the original English soundtrack as a secondary audio choice. Rob Falcone’s wonderful review of the set can be found here.