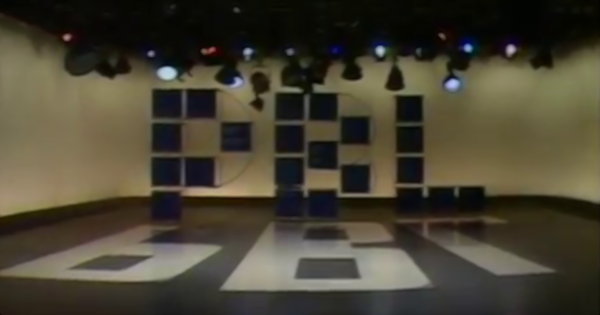 PBL (Public Broadcast Laboratory) aired on National Educational Television stations across the country for two seasons between 1967 to 1969.

PBL, produced by the Public Broadcast Laboratory and funded by the Ford Foundation, was the first regularly scheduled educational television program, airing at the same time on the same day on National Educational Television (NET) stations across the country. It premiered on Sunday, November 5th, 1967 running from 8:30-11PM (stations likely could offer it at different times if necessary). Although the Laboratory had hoped a total of 119 stations would air the program it was only seen on 89. The state educational networks in South Carolina and Georgia refused to air the debut of PBL due to its controversial content [1].

For the opening segment, the Laboratory decided to focus on the issue of race, specifically “the failure of communication between the races” [2]. The broadcast included coverage of mayoral campaigns in several cities (Cleveland and Boston among them), a meeting between “black nationalists and liberal whites” and a staging of Douglas Turner Ward’s “Day of Absence,” a play in which a small town in the South must deal with the disappearance of its African-America residents [3]. According to Broadcasting, “it was played by Negro actors in white-face as a double-edged device reversing minstrel-show stereotypes” [4].

In addition to the South Carolina and Georgia stations, the episode was also not carried by the Alabama and Vermont educational networks, but no details were provided; station KETS(TV) in Little Rock, Arkansas could not afford to open on Sunday in order to broadcast the episode; WFSU-TV in Tallahassee, Florida had planned to pick up the episode from one of the Georgia stations; KFME-TV in Fargo, North Dakota had a mechanical failure; and WVIZ-TV in Cleveland was covering a mayoral election and pre-empted the episode [6].

Critics were almost universal in their praise. The Boston Globe‘s Percy Shain declared “Sunday was the night television grew up,” Hal Humphrey of The Los Angeles Times simply noted that “TV isn’t likely to be the same again,” Dwight Newton of the San Francisco Examiner wrote that “it was a heady, meaty, auspicious start,” the Washington Post‘s Lawrence Laurent called it “a rare, absorbing evening and a brilliant start for a new force in television” and John Voorhees of the Seattle Post-Intelligencer explained that “its most startling aspect was that it had time to make its points without the incessant interruptions that plague commercial TV” [7].

Even negative comments were wrapped in positive: Ben Gross of the New York Daily News, for example, wrote that the premiere was “uneven, with many rough spots; but the basic idea of PBL is one of great promise and deserves enthusiastic encouragement” [8]. Television Magazine called the 1.5 rating the episode drew in New York City “a disappointing, if not disastrous, opening night” because the city “has got to be a bellwether town for educational television” [9]. The Laboratory spent some $250,000 (out of its two-year, $10 million grant from Ford) on advertising [10].

Here’s how a full-page newspaper advertisement for the premiere of PBL explained the show’s mission:

PBL’s goal is to demonstrate every Sunday night just how inventive, provocative and important Public Television can be. It will offer two hours (or maybe more) of incisive reporting, examinations of the arts and sciences, live dramas, strong opinion and probing comment. It will venture into subjects commercial television has not touched. It will be completely free of commercial interruptions and advertiser influence.

PBL will use television as it’s never been used before to deepen understanding and to offer new perspectives on the issues and events of our time. It will call upon the best minds in the academic world and public life, top dramatic talent and proven broadcast journalists headed by PBL Chief Correspondent Edward P. Morgan. [11]

The November 12th episode of PBL — focusing on the legality of the Vietnam War — was carried by 108 stations, with both the Georgia and South Carolina educational networks opting to air the second installment; station KYVE-TV in Yakimia Washington also aired the second episode after being unable to afford the $39 it would have cost to open a week earlier [12]. Vermont and Alabama still could not afford to air the series. PBL ran for 26 weeks during its first season; most episodes were two hours long.

When the series returned on Sunday, December 1st, 1968 it ran just 90 minutes; its second season consisted of 22 episodes and four specials [13]. PBL was not renewed following the conclusion of its initial two-year grant. Instead, the Ford Foundation and the Corporation for Public Broadcasting joined forces for two hours of Sunday night programming consisting of The Forsythe Saga (the BBC adaptation of John Galsworthy’s novel) from 9-10PM and The Advocates (a public affairs program) [14]. In addition to the 26 episodes of The Forsythe Saga, plays from Channel 13’s New York Television Theater would be presented in order to fill 39 weeks [15].

In 1994, PBS donated its archives to the Library of Congress. Here‘s a press release announcing the donation. Included was PBL. According to a reference librarian, there are 53 episodes of PBL, most of which are on 2″ videotape, as well as microfiche documents containing “episode summaries, interoffice memos, technical evaluations and some newspaper clippings– a great resource for understanding the production of the series.”

The Library of Congress screened clips from episodes of PBL at its Packard Campus Theater in March 2015, potentially the first time any footage from the series had been shown publicly since it went off the air.