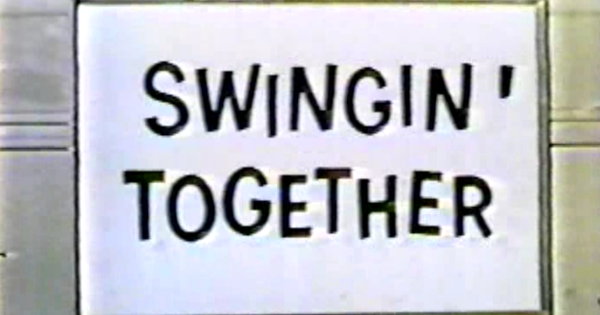 Bobby Rydell starred in this unsold 1963 sitcom pilot for a proposed CBS series about band traveling the country via bus, looking for their big break.

On Monday, August 26th, 1963, CBS aired an installment of Vacation Playhouse called “Swingin’ Together.” Vacation Playhouse was an annual summer replacement for The Lucy Show — except in in 1965, when it replaced Gomer Pyle U.S.M.C. — that consisted of unsold pilots. (Read more about Vacation Playhouse, which ran from 1963 to 1967, here; a status guide can be found here.)

“Swingin’ Together” was co-produced by Desilu Studios and Ludlow Productions. According to Lee Goldberg’s Unsold Television Pilots Vol. 1: 1955-1976, it was a potential CBS entry for the 1962-1963 season [1].

Singer and teen idol Bobby Rydell starred in “Swingin’ Together” as Bobby Day, leader of a band — Bobby Day and His Four Knights — that traveled the country in a bus, playing any gig they could get in the hopes of eventually making it big. The Four Knights were Yogi, Big “D”, Steve and Skooby Doo, played by Peter Brooks, Art Metrano, Larry Merrill and Ben Bryant, respectively. James Dunn played the band’s agent and bus driver, P.J. Cunningham. The back of the bus was roomy enough to fit a drum set, a piano and an upright bass, not to mention a guitar and a saxophone. There was even a shower.

Guest stars in the pilot included Stefanie Powers as Linda Craig, a prudish young woman who meets the band at a classy country club and learns to be a little less straight-laced, as well as Dennis, Lindsay and Phillip Crosby (three of Bing Crosby’s sons) who appeared, not surprisingly, as singers. Songs featured in the pilot included “Let’s Twist Again,” “This Could Be the Start of Something Big” and “Little Bitty Tear.” Howard Leeds wrote the pilot, which was directed by Gene Reynolds.

Why didn’t the pilot sell? The concept may have been the perfect showcase for Bobby Rydell’s singing but as a weekly series it didn’t have much to offer. There are only so many venues where Bobby Day and His Four Nights could conceivably have played at before things became repetitive. And after a season of not hitting the big times, viewers may have decided that the band just wasn’t that good.

8 Replies to “Swingin’ Together (Unsold Pilot)”