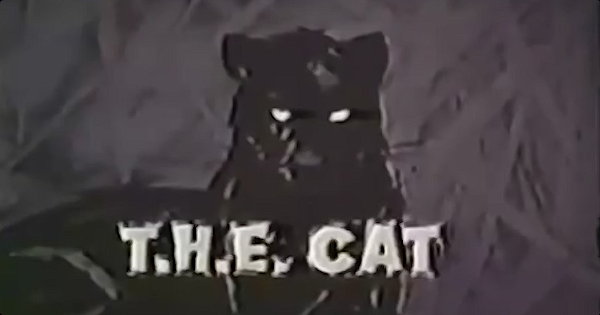 This 1966-1967 NBC adventure show starred Robert Loggia as a former cat burglar who decided to turn straight and become a bodyguard-for-hire.

NBC’s T.H.E. Cat was a half-hour action/suspense series that starred Robert Loggia as Thomas Hewitt Edward Cat, a former acrobat and thief turned professional bodyguard. According to press material from the network, “usually his clients are marked for death. Only T.H.E. Cat stands between them and their would-be killers” [1]. NBC gave it the 9:30-10PM time slot on Fridays following The Man from U.N.C.L.E., where it would compete with The Milton Berle Show on ABC and The CBS Friday Night Movie.

Cat operated out of a night club called Casa del Gato, or House of the Cat, owned by Pepe Cordoza (played by Robert Carricut). R.G. Armstrong played Captain MacAllister, Cat’s police liaison. The series premiered on Friday, September 16th, 1966 to mostly positive reviews. Aleene MacMinn, writing in The Los Angeles Times, called it a “very slick production” and predicted that “strong lead-in from The Man from UNCLE should help build and audience for this one and if the quality of the initial segment is maintained the audience will probably stay” [2].

Do you all recall a program called T.H.E. Cat? It was in the early 60’s I think. The character was a “cat burglar” named Thomas Huelett (sp?) Edward Cat. Ring any bell? Any information on it? Thanks
k

Jack Gould, on the other hand, opined that “in the opening installment so many unexplained people made so many entrances and exits that the total was just confusing and bereft of suspense” [3]. The Chicago Tribune‘s Clay Gowran suggested that viewers would fall into two camps: those who loved the show for its cinematography and acrobatics and those who detested its violence and strange story lines. He ended his review by explaining that” Cat sounds pretty silly here, but he comes out better on film. We liked the show, for all its wildness and feel it deserves a chance to settle down and see it can do. But we can see it disappearing under an avalanche of protests if subsequent episodes are as woolly as last night’s” [4].

(According to Hal Humphrey, a scene cut from the pilot episode saw Cat explaining his former life of crime and acrobatic past to a woman; a new opening sequence was eventually created to share this with viewers [5].)

The first two episodes averaged a 17.5/32 Nielsen rating [6, 7]. In late October, during a press tour for the series, Loggia revealed that NBC was happy with the show’s performance: “We’re drawing about a 30 per cent share of the audience, which NBC considers fine for a new show with a new star. We hope we’ll improve that with some changes we’re making, now that we’re thru the first 16 shows and starting production of the next batch” [8].

For starters, the series would involve more romance: “They had me buss a blonde in the premiere, but as nearly as I can remember it hasn’t happened since. Now, tho, the kissing will start again. The audience seemed to like it–and me, I’m all for the idea.” Another change involved getting rid of R.G. Armstrong: “Cat’s supposed to be a loner, and when he works hand-in-glove with the cops he becomes an organization man” [9]. As for the show’s violence, Loggia argued “the spirit of our violence is different. We don’t go in for slow-moving, bone-crunching stuff; instead, Cat is supposed to be not only deadly but beautiful to watch in action, and that’s the way it seems to be getting across” [10].

Ultimately, NBC wasn’t happy enough with T.H.E. Cat‘s performance to renew it for a second season. Whether that had anything to do with the mid-season changes is debatable. It was routinely beaten by The CBS Friday Night Movie and, for the period running October through December 1966, averaged a 15.5 Nielsen rating, placing 69th out of 91 programs (The CBS Friday Night Movie had a 20.4 rating and ranked 24th; The Milton Berle Show ranked 82nd with a 12.9 rating) [11].

In late February, Broadcasting called Friday night “the biggest NBC hole to be plugged” and noted that both T.H.E. Cat and Laredo were likely to be cancelled [12]. When the network unveiled its 1967-1968 schedule on March 15th, both shows were indeed gone [13]. Guest stars during the show’s one and only season included Pippa Scott, Cesar Romero, Diana Muldaur, Sorrell Booke, Sally Kellerman and Susan Oliver.