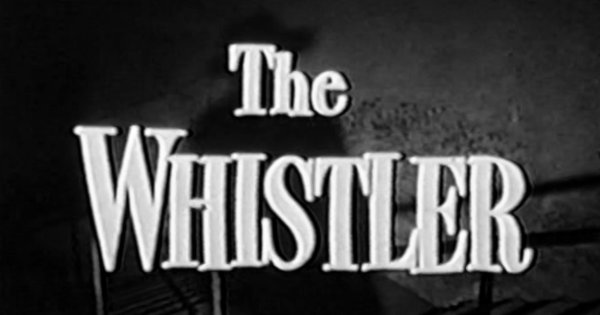 This syndicated, mystery anthology show aired during the 1954-1955 season. It followed both a long-running radio series and a series of films.

Sponsored by Signal Oil, “The Whistler” began airing over the CBS West Coast radio network on May 16th, 1942 and continued until July 31st, 1955. During the summer of 1946 and again from 1947 to 1948 it aired nationwide. A dramatic mystery anthology series, the only recurring character in “The Whistler” was the narrator, voiced by a variety of actors over the years, including Bill Forman, Gale Gordon and Joseph Kearns. From 1944 to 1948 a series of eight films based on the radio series were produced by Columbia Pictures, many of which were directed by William Castle. Richard Dix starred in all but the eighth and final film (The Return of the Whistler) but played a different character in each one.

In its March 6th, 1954 issue, Billboard reported that a syndicated television series based on “The Whistler” was in the works at CBS-TV Film Sales [1]. In May, Billboard published a list of filmed series available for both repeat and first-run syndication, including information on the distributor and the number of episodes to be available as of September 1st. The Whistler was said to be a first-run, half-hour mystery series with 26 episodes ready to go [2]. The head of CBS-TV Film Sales, Leslie Harris, approached Oscar Katz, head of research for CBS-TV, to conduct “intensive research studies” of The Whistler in an attempt to determine its “audience composition” [3].

Katz would have a mixture of children and adults, both male and female, to fill out questionnaires listing their likes and dislikes. It was expected that male viewers would be most interested in the series but specific information on their preferences would allow CBS-TV Film Sales to approach advertisers targeting male viewers [4]. According to Billboard, CBS-TV Film Sales was willing to offer a “projected rating for the show in cities of 100,000 population” based in part on how well the radio version did; Signal Oil maintained records on which radio programs were most popular and episodes of the television series would be based on those episodes [5].

According to Leslie Harris, the studies would have a hand in “pre-fabricating the show as much as possible for maximum sales,” which meant removing “all violence, bloodshed, drinking and even cigarettes” (getting rid of cigarettes meant advertising for cigars) [6]. In September, it was revealed that Joel Malone would oversee production of the 26 episodes for Lindsley Parsons Productions, Inc. [7]. Signal Oil, sponsor of the original radio show, would also sponsor the television show on an alternate week basis, but only on the West Coast; Lipton Tea had also purchased the series on an alternate week basis in some markets [8].

In early October, Billboard reported that CBS Television Film Sales was reevaluating its current crop of film programs, dropping those that were not performing well for advertisers, and working on improving distribution, all in an effort to better deal with an increasingly competitive syndication business. The company planned to spend more money, for sets and “general production detail,” on The Whistler “to make certain that its quality is satisfactory” [10].

The Whistler likely debuted on stations across the country between September and November 1954. In late November, Joel Malone formed his own company, Joel Malone Associated, to take over production of the remaining 26 episodes of The Whistler (meaning 13 had been completed out of a total 39), due to disputes over costs between CBS-TV Film Sales and Lindsley Parsons Productions [11]. The disputes related to the length of time it was taking to film the series and Malone’s control of over-the-line costs.

According to Billboard, The Whistler tied for 14th in the November 1954 Pulse Multi-Market Ratings with a 12.0 rating (it was tied with Foreign Intrigue) [12]. That placed it behind other CBS-TV Film Sales shows — Gene Autry and Annie Oakley, for example — but ahead of Amos & Andy. It performed better among male viewers, tied for 6th with Boston Blackie, drawing 84 male viewers out of every 100 television households [13].

The Whistler was not renewed for a second season in first-run syndication, although the 39 episodes remained on television for years to come. Why weren’t new episodes commissioned? The ratings were solid but perhaps the conflict over production led CBS-TV Film Sales to decide against ordering another season. Or perhaps sponsors pulled out. Regardless, the series remained popular in repeat syndication throughout the 1950s.

7 Replies to “The Whistler”