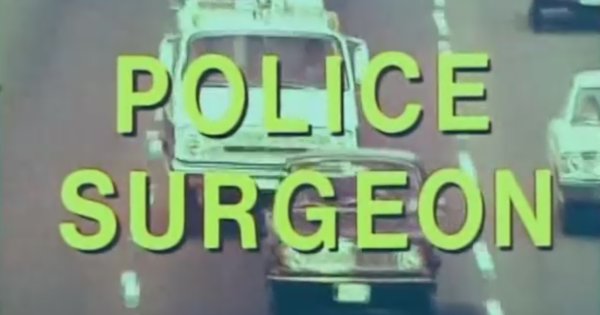 There was a show on television in the early 1970’s, it apparently didn’t last very long. This guy was both a doctor and a cop, I don’t remember the name of the show I just remember seeing it. I was about 5 or 6 years of age at the time. Would you know anything about it, I have looked all over the internet to find info, and can’t.
Charles

I believe the show in question was a syndicated half-hour drama called Dr. Simon Locke. Produced in Canada, the series premiered in September of 1971 on stations throughout the United States. Sam Groom starred as the title character, Dr. Simon Locke (Groom had previously played a doctor on NBC’s soap Another World). Initially, Locke worked in a small rural town and Jack Albertson co-starred as his mentor, Dr. Andrew Sellers, with Len Birman as Dan Palmer, chief of police for the town. The name of the show changed to Police Surgeon for the 1972-1973 season, which saw Dr. Locke moving to the big city where he worked for the police department. Chief Palmer came along but Dr. Sellers left the show. For the 1973-1974 season, Chief Palmer was replaced by Lt. Jack Gordon (played by Larry D. Mann).

Dr. Simon Locke was panned by critics when it debuted.

John P. Reilly of The Hour called the show a “disaster” and wrote that “it has to be seen to be believed” [1]. He also had this to say:

The program is a low-grade “Marcus Welby, MD.” You know, the wise old country doctor, and the smart young whippersnapper just out of medical school who knows everything. The writers ought to get some sort of an award for being able to assemble so many cliches in one spot during a half-hour show.

Not only is the writing bad, but the sets, the filming, the sound, the props–everything is of equally poor quality. [2]

A review in The Associated Press was kinder, explaining that two episodes were filmed each week at a cost of about $40,000 each, which made for “just another doctor drama, less satisfactory than the hour-long shows because there is little time to develop characters and with scripts that seem threadbare from overuse” 3]. Critics weren’t the only ones not happy Dr. Simon Locke; co-star Jack Albertson also had issues with the show, which is why he left after the first season.

In May of 1972, The Palm Beach Post quoted Albertson as saying the show “was a piece of junk” [4]. He was soon able to rebound, however, with a starring role on NBC’s Chico and the Man, which premiered in September of 1974. In an August 1974 article in The (Montreal) Gazette, Albertson referred to Dr. Simon Locke as “that piece of syndicated rot” [5].

Charles likely remembers watching the Police Surgeon version of the show, when Dr. Locke was involved in solving crime. But its possible he is remembering another show entirely, so if anyone can think of any other early 1970s shows in which there was a character who was both a doctor and a cop, please let me know.