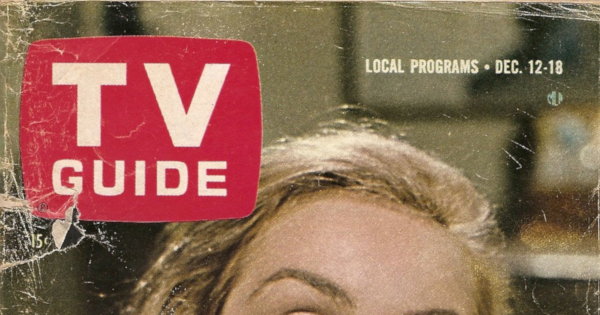 On the Cover: Julie Newmar of My Living Doll on CBS (photo by Carl Frith).

I am happy to report that this issue of TV Guide doesn’t include any articles about football. Gracing the cover is the lovely Julie Newmar, the doll of My Living Doll on CBS. The cover article “Everyone’s Living Doll” offers a range of interesting facts about Newmar. She had a poster of Albert Einstein on her bedroom wall during high school, for example, and used to read books while driving before switching to using a tape recorder to learn Italian and Spanish while driving.

Newmar’s beauty is noted a number of times: “She is much sought after, personally and professionally, on Broadway and in Hollywood. But the hitch seems to be that she is loved for what to her are the wrong reasons. In almost any consideration of Julie Newmar, the emphasis is almost unavoidably upon the physical.” Yet Newmar seems comfortable with herself, if sometimes shy and kooky.

Of her role on My Living Doll, Newmar had this to say: “I have had to learn an entirely new area of comedy–develop a character that’s never been done before. I am giving birth to something!” 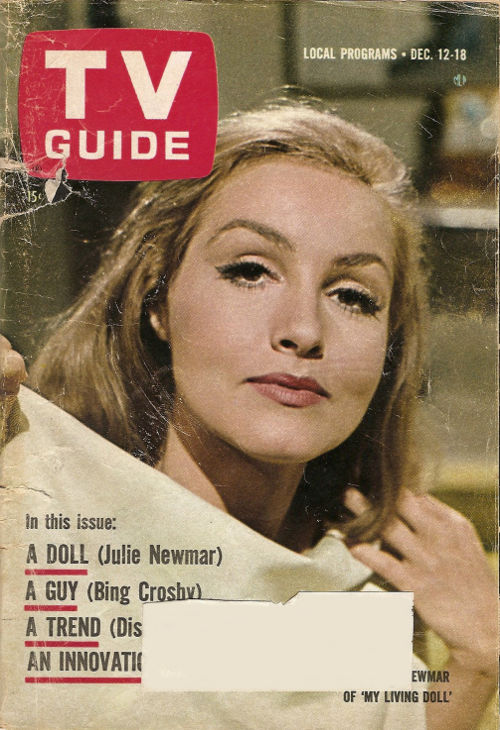 “How Bing Crosby Has Mellowed” by Leslie Raddatz is a somewhat depressing article supposedly about the new and improved Bing, currently starring in The Bing Crosby Show on ABC. We learn that he films five episodes in three weeks and then takes two weeks off. He got his 12-year-old co-star Diane Sherry tickets to see The Beatles. He wears a toupee. In parenthetical asides Raddatz notes how aloof Bing has always been, how mysterious and unknown he is to even his closest friends, how the change in his singing voice has led some to wonder if he is past his prime, and how his grown sons have shattered his image to some degree.

David Lachenbruch’s three-page article “The New Look for Color TV” is an exhaustive overview of the state of color television. According to the article, since 1954 some 2.5 million color sets have been sold, all with 21-inch screens. I had no idea that for nearly ten years all color sets were bulky — some 26 inches deep — due to the size of the color picture tube (which also happened to feature rounded corners).

There have been improvements in brightness, too, now found in all new color sets regardless of the size. Even smaller 19-inch tubes are in the works but they won’t be compact, lightweight and low-priced like similar 19-inch black and white sets. In fact, portable or even easily moveable color sets are a long way off. If a 16-inch color sets hit the market in 1966 as planned, it will weigh between 60 and 100 pounds.

The issue includes two other articles: “‘Oh no, not again!’,” a look at how Hugh Downs surprised his wife for her birthday with a secret trip to Jamaica; and “She Might Have Played Lolita,” about 18-year-old actress Sherry Alberoni, who goes everywhere with her mother and almost starred in Lolita.

This week Cleveland Amory reviewed Wendy and Me, the new sitcom produced by and featuring George Burns. Amory noted that Burns inserted himself into the series at every opportunity but not as his character (who owned the apartment building where the other characters lived). Instead, Burns used his announcer role to poke fun at the show, himself, the titular Wendy (played by Connie Stevens), and more.

Despite all that, Amory wasn’t too negative about the show itself. “It’s not our favorite, but neither is it a complete miss–actually, it’s one of those near Mrs,” he wrote. Amory didn’t seem too taken with star Connie Stevens but ultimately felt “she comes close to making up for the fact that almost every plot we’ve seen is an obvious and often wearing blend of mistaken identity and missed connections.”

The “As We See It” editorial this week praised NBC’s special “The Louvre,” which aired on November 17th, 1964. “Rarely have script, color, photography and narration been blended so smoothly, so movingly,” said TV Guide. All involved with its production were given high marks. In fact TV Guide found fault with only two aspects of the special: that sponsor Xerox too often interrupted it with one-minute commercials (fewer but longer ones would have been better) and that too few people watched it (according to Arbitron, it received a 19% share of the audience compared to 30% for The Doctors and the Nurses and 47% for The Fugitive).

There was a lot of news about pilots in the Hollywood and New York TV Teletype columns:

Rounding out the national section is a picture feature showcasing discotheque dresses modeled by Julie Newmar, as well as the regular crossword puzzle.

The “For the Record” column in the listings section once again featured four news reports:

The letters page in the listings section featured a lengthy article from the crew of a submarine:

As members of the U.S. submarine force, we have been appalled by the reflection on us by the actions of the crew aboard the submarine in Voyage to the Bottom of the Sea. We are referring to the panic that takes place every time something goes wrong on the Seaview. If this happened on submarines every time something went wrong, there would be very few submarines afloat today. The prestige of our crew and the whole submarine force is high and we believe that the actions of the crew of the Seaview are degrading to us.
Crew Members, USS Jack
New York, N.Y.

There were also two more letters reacting negatively to the November 21st article about Jim Nabors:

Now that you jokers have your hokey dialog out of the way (one or two paragraphs would have been most adequate), let’s have an article on Jim Nabors written in English and let’s see who this guy really is.
Don M. Stalter
Vantage, Wash.

I would have read the article about Jim Nabors but it was written in such obscure language I gave up after the first “coupler” sentences.
Betty K. Robertson
Atlanta

“We’ll be getting around to Jim Nabors again one of these days,” promised an editorial reply.

And there was a letter critical of critic Cleveland Amory:

One of these weeks, I’m sure critic Cleveland Amory is going to turn in a whole column full of those Clever Little Quips and not mention any show at all.
David Wolf
New York, N.Y.

Other letters included one from a reader responding to a November 21st article about actor Edward Andrews; a letter lamenting the cancellation of The Outer Limits (“Why, oh why did ABC move it to the Saturday Night Graveyard?”); and a letter from a reader tired of Dr. Kildare (“I had to cut a few of their more recent house calls short”).

This was the last week of the regular NFL season, with games on both Saturday and Sunday. The Outer Limits was pre-empted on Saturday for an hour-long documentary about the 1964 Nobel Prize Awards hosted by Alistair Cooke. The 1956 film War and Peace starring Audrey Hepburn and Henry Fonda aired from 8-11:25PM on NBC’s Saturday Night at the Movies: 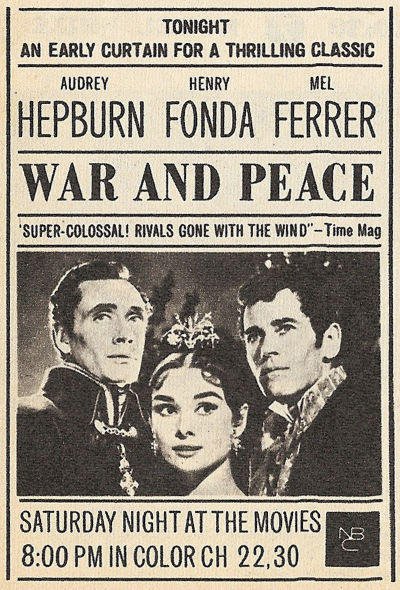 Starting its new season on Sunday at 6PM was The Twentieth Century with an installment focusing on Anne Frank, hosted by Walter Cronkite.

Locally, it was a packed week. WTIC-TV (Channel 3) aired another half-hour installment of From the College Campus on Sunday, December 12th from 11:30AM-12PM. Featured this week was a panel discussion Yale University. That same day WNHC-TV (Channel 8) aired a half-hour special titled “Connecticut Welfare” from 12:30-1PM. Along with dramatic vignettes about those on welfare, the special also saw Edward C. Harold of the Child Welfare Association moderate a discussion by a panel of social workers.

WHYN-TV (Channel 40) ran a half-page advertisement for its local series Continental Classroom, which aired 8:30-9AM Monday through Friday: 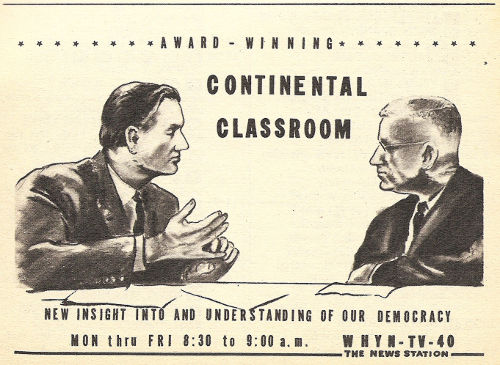 Also airing Monday through Friday (but only this week) on WATR-TV (Channel 20) was a half-hour of Christmas music featuring church choirs from Waterbury. The musical program ran from 7-7:30PM. WHNB-TV (Channel 30) and its translator (Channel 79) aired a half-hour public affairs report on Monday, December 14th from 7:30-8PM. Reporters Bary Barents, Harvey Olson, and Al Kennedy discussed the current reapportionment complex with attorneys for the state’s Democratic and Republican committees.

On Tuesday, December 15th from 11:30PM-12AM, WWLP (Channel 22) and WRLP (Channel 32) aired a half-hour program on mountaineering featuring William L. Putnam, WWLP’s president and general manager. He was also an expert mountain climber who discussed the difficulty in building a cabin on the Northern Selkirks in British Columbia.

WJAR-TV (Channel 10) aired a live basketball game on Friday, December 18th from 8:30-10:30PM, pre-empting The Bob Hope Show and The Jack Benny Show; The Jack Paar Show was scheduled to be joined in progress at 10:30PM.

Thursday, December 17th, 1964
Sue Thurman of the Institute of Contemporary Art presents the highlights of the current exhibit.

Friday, December 18th, 1964
Students from two local high schools compete in a test of knowledge and understanding of chemistry.