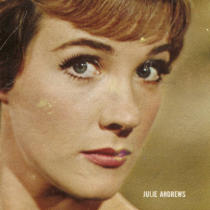 On the Cover: Julie Andrews (photograph by Ivan Nagy).

There wasn’t much to read in this issue, with just three articles. It’s interesting that Julie Andrews graced the cover even though there wasn’t an article about her inside. There was, however, a lengthy picture feature about her upcoming NBC special. The big article in this issue is a profile of Max Baer titled “‘A Lot of Hostility'” that runs a little under three pages.

The son of boxer Max Baer, the junior Baer grew up in the shadow of his famous father, developing both trust issues and big ambitions. After his father died in 1960, he moved to Hollywood and eventually became an actor. He soon landed the role of Jethro on The Beverly Hillbillies. 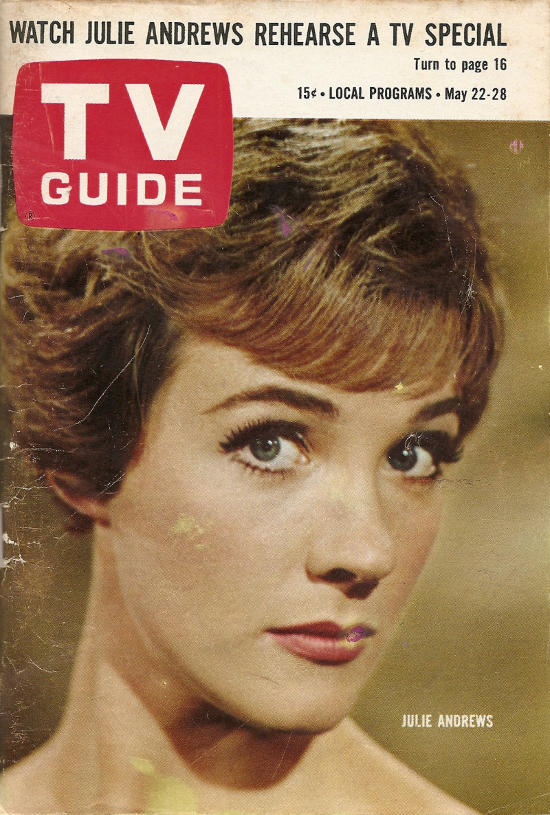 Although the dim-witted Jethro doesn’t allow for much depth, Baer isn’t too concerned:

I’m not complaining. Sure, Hillbillies isn’t my type of humor, personally. I’d like to move on to bigger things. But I go for this good Hollywood life. The money’s good, the dames are good, even if all the older dames in town want to mother me.

He’s also very opinionated, about actors, acting, stardom, and more. Jim Drury (The Virginian) is “a nice guy personally but a nothing actor” while Robert Reed (The Defenders) is “a nice-looking kid and that’s all.” On the topic of politics: “What do I care which party blows up the world?” About acting: “Acting is a business, not an art. You don’t have to study to learn a business.” He has turned down acting roles that he knows he can’t handle, suggesting he’ll be ready for them in four of five years.

The profile concludes with some introspection by Baer:

There’s a lot of hostility churning inside of me. Some days I stand in front of the mirror and I stare at my chubby face and I holler, “I hate you!” about four thousand times. But then I think, “Hey, wait now, be reasonable. I’m 27 years old. I wish everyone could be as successful as I am at 27–and I hope to heaven I can say the same at 50.”

Also in this issue is TV Guide‘s fourth “If I Had a Network” essay, this one from British humorist and critic Malcolm Muggeridge. It’s titled “I’d Serialize ‘Huckleberry Finn’ Instead of ‘Peyton Place'” and makes for very dull reading.

Muggeridge would first mount “a furious, sustained and lethally well-documented assault” on the Nielsen ratings, instituting instead some sort of qualitative and quantitative system to more accurately estimate viewing habits, perhaps through the sociology department of Columbia University. Next, he would focus his network’s content on comedy, which should be “television’s greatest asset” but unfortunately is not. “Those tired old tell-maestros (I name no names) who for years past have been repeating their gag-writers’ indifferent jokes for vast sums of money–are they worthy exponents of television’s comic possibilities? Surely not.”

To help with the comedy problem, Muggeridge would reach out to Zero Mostel and together they would develop “the comedy of daily life, wrung from misfortunes and discomforts, as well as skimmed off the ebullient surface of joys and delights.” In other words, soap opera. He calls the soap opera, like England’s Coronation Street, “the most satisfactory of all television offerings.” The BBC’s Steptoe and Son “got somewhere near” the ideal program that Muggeridge would strive for. So, too, did the British version of That Was the Week That Was (but not the NBC version).

Muggeridge would then entice Fred Friendly to leave CBS and take charge of news and public affairs programs. Friendly would have just two directives to follow: “to go for comment, the harder and more vehement the better” and “to leave news stories as such to the news agencies, as sensible newspapers do, devoting all available camera resources to elucidating the meaning or significance of what is happening in the world.” Finally, Muggeridge would focus on making his network “intensely American,” perhaps by turning Huckleberry Finn into a serialized TV show rather than Peyton Place. His network would thus be “something joyous, innocent, humorous; exactly contrary to the gangster violence, the sick sex obsessions, the portentous moralizing, which so often, alas, pass for being American.”

The final article, “Be a Rich TV Writer” by F.P. Tullius, isn’t an article at all. It’s a list of 14 “dramatic situations” and readers are tasked with guessing the line of dialogue that would follow. Here’s an example:

Drawing a blank on what the next line of dialogue should be? Here it is: “You know I never accept resignations.”

The “As We See It” editorial this week tackles Gresham’s Law (“Bad money drives out good”) in relation to television. Unlike radio, TV Guide feels there is still good in television despite all the bad money. While there may be fewer musical specials and limited drama and far too many “B” movies, soap operas, and wriggle ‘n’ writhe shows in prime time, “you really can’t call this proof that the bad is driving out the good, because television still has much that is quite good, and besides in many cases it’s all but impossible to decide what’s better than what, or worse.”

Cleveland Amory’s review of Celebrity Game suggests viewers have to drink before watching. Amory is in top form with this review, offering many quotes and examples but little substantive criticism. He doesn’t seem taken with host Carl Reiner or many of the guests. At the end of the review, Amory “looked back fondly on to the show on which Tommy Sands prefaced his answer ‘I’m not going to try to be cute or funny, because I’m not cute or funny.’ With that line, he almost stole the show.”

Rounding out the national section is a two-page picture feature examining the use of rear-projection on Voyage to the Bottom of the Sea, a much longer seven-page picture feature showcasing Julie Andrews preparing for her November NBC special, a TV Jibe feature from Helen M. Braun offering humorous ways to fix a broken TV set, and the regular TV crossword puzzle.

There is no letters page in this issue. There is, however, an article in the listings section. It’s not included in the table of contents. It comes after the TV Movie Guide and TV Sports Guide but before the Saturday listings. “When It’s ‘Ice-Cream Time’ in the White House” by Samuel Grafton is a two-page examination of the ongoing disagreement between the networks and the White House over President Johnson’s televised addresses. The networks continue to maintain that they need proper notice, which previous administrations offered, while President Johnson apparently prefers to go on at the last minute.

The listings section this week is filled with advertisements for local programs. The networks, it seems, have started to check out for the summer. There are eight local ads, most of them full pages, and just one network ad, a half-page advertisement for The Bell Telephone Hour. That’s not to say there wasn’t anything interesting on the networks during the week.

ABC aired a baseball game between the San Fransisco Giants and the Houston Astros at 2PM on Saturday, May 22nd. At 2:30PM, NBC Sports in Action aired its final Saturday afternoon episode for several months, featuring coverage of Notre Dame’s annual charity football game (the following day it would move to 6:30PM). NBC aired an Early Bird special called “The Changing Face of England” from 6-7PM, with Sander Vanocur. It was not live. Four weeks of Jackie Gleason repeats kicked off on CBS at 7:30PM.

At 2PM on Sunday, May 23rd NBC aired “The Inheritance,” an hour-long color special tracing the development of the ancient Hebrews from a nomadic tribe into a nation. Alexander Scourby narrated. ABC repeated the “Custer to the Little Big Horn” episode of Saga of Western Man from 4-5PM. At 6:30PM, NBC Sports in Action premiered in its new time slot with coverage of the Monte Carlo Rally. [The sports series would remain in this time slot until August.]

On Monday, May 24th from 10-11PM CBS aired a CBS News Special called “‘National Drivers Test'” that was split into four sections. Judgement featured Walter Cronkite explaining how to prevent common collisions. Knowledge was an animated quiz on rules of the road. Perception was a short film examining driving hazards and alertness. Special Situations showed viewers how to deal with an unavoidable collission. After each segment, Mike Wallace discussed test results from 2,000 drivers tabulated by computer.

[TV Guide revealed in its May 1st issue that CBS was receiving 50,000 requests a day for test forms and more than 20 million people were expected to participate.]

The season premiere of Moment of Fear aired on Tuesday, May 25th from 8:30-9:30PM on NBC. Like Cloak of Mystery, which debuted last week, the anthology series consisted of repeats from earlier filmed anthology series. The premiere episode was “Cat in the Cradle,” which originally aired on G.E. Theatre in 1961. At 10PM, Donald O’Connor hosted a tribute to Cole Porter on NBC’s The Bell Telephone Hour.

Locally, it was a relatively quiet week. Another installment of This Is UConn aired on WTIC-TV (Channel 3) from 1-1:30PM on Saturday, May 22nd. Both WHDH-TV (Channel 5) and WPRO-TV (Channel 12) aired a baseball game between the Boston Red Sox and the Cleveland Indians at 1:30PM. WNHC-TV (Channel 8) aired a different baseball game, this one between the Washington Senators and the New York Yankees, at 1:55PM.

At 5PM, WBZ-TV (Channel 4) premiered Hollywood a Go Go, a syndicated musical variety series that debuted in other parts of the country in January 1965. At 4PM, WBZ-TV pre-empted NBC’s Early Bird special (“The Changing Face of England”) for an episode of Death Valley Days.

On Sunday, May 23rd from 10-11AM, WNAC-TV (Channel 7) aired highlights of the May 20th Massachusetts Committee of Catholics, Protestants and Jews Awards Dinner. Southern Connecticut State Teachers College was featured on WNHC-TV’s Morning Seminar from 11-11:30AM. At 12:55PM, WNHC-TV aired another baseball game between the Senators and the Yankees while at 1PM WHDH-TV and WPRO-TV aired another baseball game featuring the Red Sox and the Indians. WBZ-TV pre-empted NBC Sports in Action at 6:30PM to air an NBC News Special about Russian leaders, delayed from the previous week.

At 7:30PM on Monday, May 24th WGBH-TV (Channel 2) premiered a new series called Changing Congress with Joseph F. McCaffrey. The premiere episode was titled “A House Divided” and examined the House of Representatives. At 9PM, WGBH-TV aired an hour-long special highlighting the May 15th public hearing on American policy in Vietnam. [Both programs were likely National Educational Television presentations.] Finally, at 10PM, WGBH-TV aired a local special called “Years of Trial” about changes in science and math education. 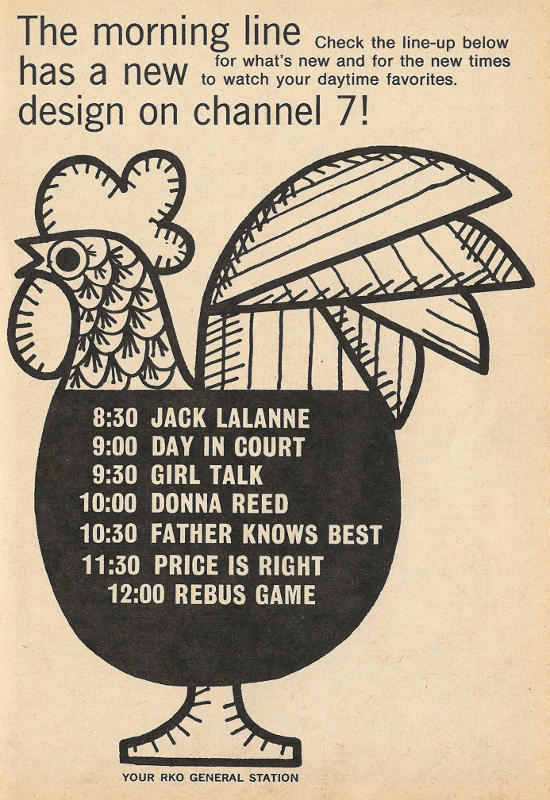 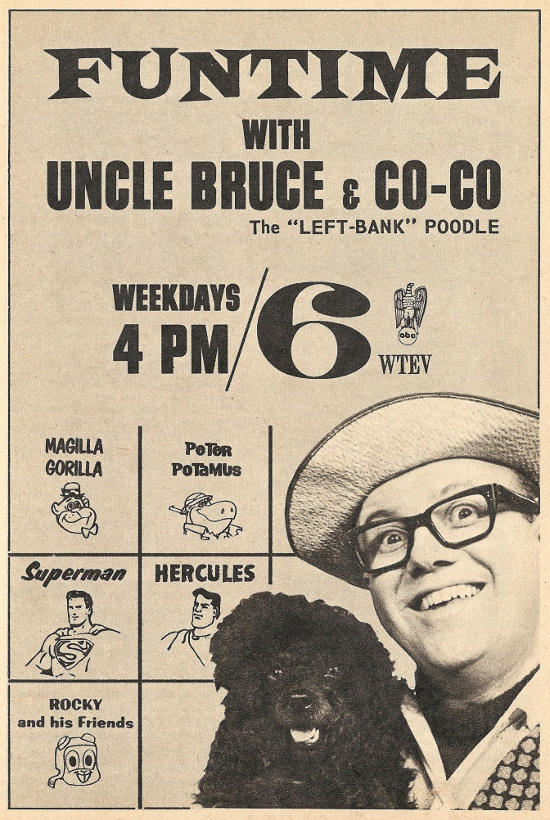 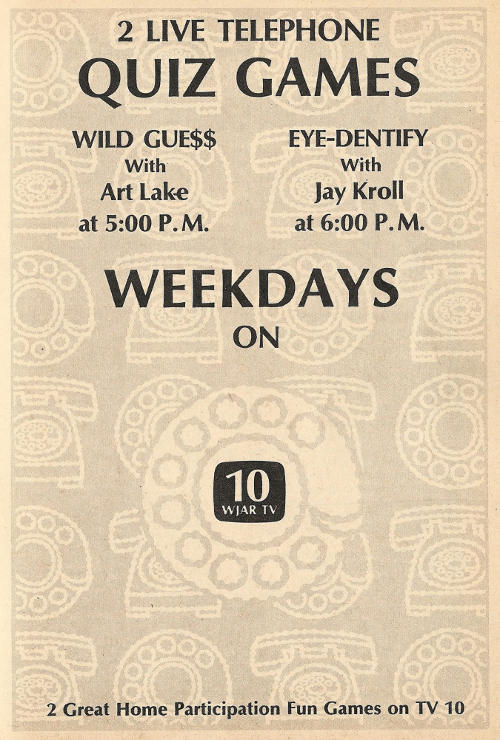 Tuesday, May 25th, 1965
A look at a new program that provides opportunities for qualified women to return to the teaching profession.

Friday, May 28th, 1965
A program of classic music is presented by the students of concert pianist Miklos Schwalb.