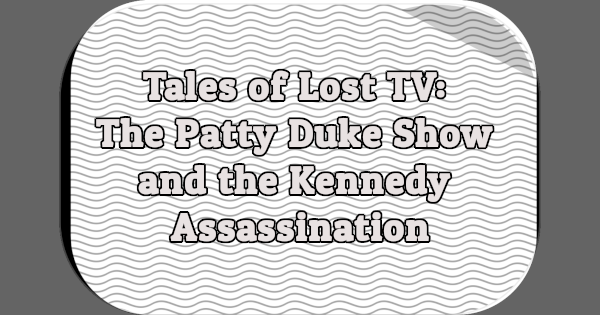 The Death of a President

Following President Kennedy’s assassination on November 22nd, 1963, the television industry faced a daunting task. The networks had to ensure they didn’t broadcast anything that might seem offensive or disrespectful. Or anything that might remind the nation of its loss. Rescheduling proved the easiest solution. For example, CBS opted not to broadcast the installment of Route 66 scheduled for November 29th, 1963 because it involved an assassin. Some sources indicate the episode aired in 1964 while others claim it remained unseen for decades.

NBC went one step further and reportedly destroyed an episode of sitcom The Joey Bishop Show. Why? It featured Kennedy impersonator Vaughn Meader.

The networks altered other episodes to remove concerning connections to Kennedy or his assassination. CBS changed the name of an episode of The Defenders from “The Gentle Assassin” to “Climate of Evil.” The network removed a reference to President Kennedy from another episode of The Defenders (“Claire Cheval Died in Boston”) despite not having an air date scheduled yet. It ultimately aired on January 4th, 1964.

ABC likewise made a minor alteration to an episode of The Patty Duke Show.

A sitcom with an implausible premise, The Patty Duke Show debuted in September 1963. Patty Duke starred in the dual roles of identical cousins Patty and Cathy Lane. The series occupied the 8-8:30PM ET time slot on Wednesdays.

Titled “How to Be Popular,” the episode saw Cathy trying to improve her popularity by following the advice of a newspaper columnist. As originally filmed, it featured a short sequence in which Patty dreams she’s given a medal by the President.

Details are scarce. Here’s how the Associated Press described the cut footage:

It was a dream sequence showing Patty receiving a medal from a man–whose face was not seen–seated in a rocking chair.

Some sources state the man in the rocking chair spoke with an imitation of President Kennedy’s famous accent.

Locked in a Vault?

Could this lost dream sequence still exist? It seems unlikely. More than five decades have passed since ABC had the footage removed from the episode. But the footage could be tucked away in a film canister alongside the original film negatives for the episode. Anything’s possible.

If found, should this lost footage be restored to the episode and released to the public? Hit the comments with your thoughts.

8 Replies to “Tales of Lost TV: The Patty Duke Show and the Kennedy Assassination (1963)”