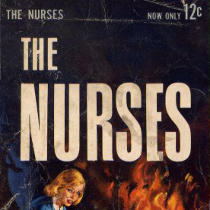 The Nurses premiered on CBS in September of 1962. It was retitled The Doctors and the Nurses for its third and final season in the fall of 1964; the series ultimately ran for a total of 98 episodes. In April of 1963, Gold Key published three issues of a comic book based on the series. The third issue, with a publication date of October 1963 (meaning it likely came out in September of that year), is the one I’m reviewing here. The cover features photographs of actresses Zina Bethune and Shirl Conway, who played Gail Lucas and Liz Thorpe, respectively. My copy is in pretty bad shape; the cover comes all the way off, having separated entirely from the staples.

The issue runs 32 pages and includes two main stories based on The Nurses. The first, “Heroine in White,” opens with Dr. Murray racing up to the emergency entrance of Alden General Hospital, where he is met by Nurse Lucas. In the car is a man who was badly beaten in a mugging. Dr. Murray just happened to be driving down an unlit street when he came upon three men attacking a fourth. Driving straight up onto the sidewalk, Dr. Murray was able to scare off the men but not before getting a good look at them. 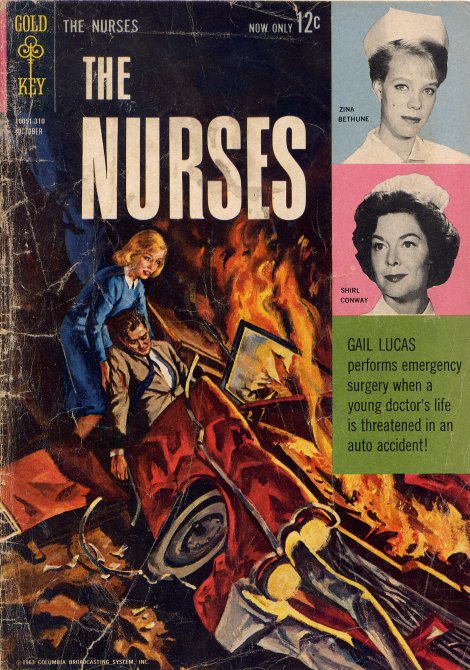 Nurse Lucas arranges from a photographer to take Dr. Murray’s picture for the paper, against Dr. Murray’s wishes. As punishment, he tells Nurse Lucas the two will be having dinner the following day. The next morning the muggers, having seen Dr. Murray’s photograph in the paper, wait outside the hospital for him to leave. When he does, he has Nurse Lucas with him. The muggers force Dr. Murray’s car off the road and it tumbles down the side of a cliff. Nurse Lucas is thrown clear. Dr. Murray, unfortunately, isn’t so lucky. After pulling him free Nurse Lucas realizes he is hemorrhaging from a cut artery in his arm.

Despite her misgivings, and with only Dr. Murray’s surgical kit, Nurse Lucas is able to tie off the artery. She then identifies the muggers for the police. Back at the hospital, though, she blames herself for Dr. Murray’s injuries. Nurse Thorpe tells her to knock it off. And when Dr. Murray wakes up, he thanks her for saving him. Her conscience soothed, Nurse Lucas can finally get some rest. 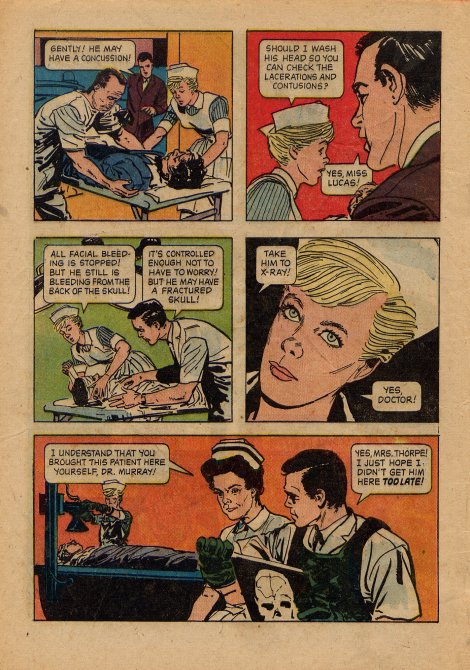 In the second story, “All Scars Don’t Show,” Nurse Thorpe tries to help a young woman who continues to limp despite her leg having healed completely. Rehabilitation doesn’t seem to work yet x-rays reveal nothing at all wrong with the leg. Eventually, Nurse Thorpe realizes that the woman is afraid that scars on her face may never heal, meaning she will never be able to model again. The limp is a way to keep from having to leave the hospital. Nurse Thorpe brings in a photographer to retouch a photograph of the woman to prove that she can still have a career.

But the woman reacts violently to the idea of being photographed and is sedated. Nurse Thorpe sends Nurse Lucas to bring the photographer back. He takes pictures of the woman while she is asleep, retouches them and then presents them to her the following day. He offers to sell one if she’ll sign a release. Excited, the woman gets out of bed and walks to a desk to sign the papers. And she doesn’t limp. Thanks to Nurse Thorpe, the woman will leave the hospital healed physically and mentally.

In addition to these stories, the issue includes a five-page “Emergency Crew” back-up story and a one-page essay on early hospitals. The inner and outer covers feature black-and-white “Keys of Knowledge” stories. The artwork is very interesting, appearing at time to be rough sketches, although occasionally this makes the characters appear gaunt. In one particular panel, Nurses Thorpe and Lucas are depicted smiling, yet their lips are stretched disturbingly thin across their faces. At other times, however, the characters — particularly Nurse Thorpe and the young woman from the second story — are actually quite attractive.