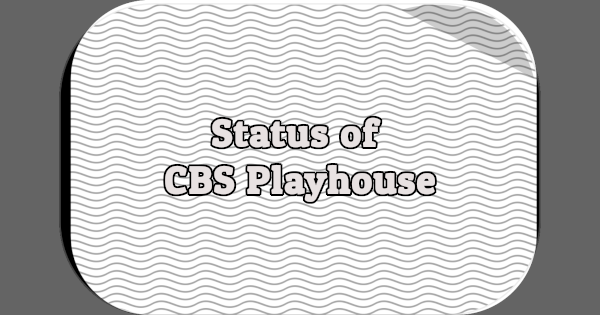 What’s the status of CBS Playhouse, the dramatic anthology series CBS aired irregularly between 1967 and 1970? All 12 episodes are held by various television archives, although no single archive has every episode. Both the UCLA Film & Television Archive and the Peabody Awards Collection have ten of the 12 episodes in their collections. The Paley Center for Media has seven episodes, most of which are in two or three parts. The Wisconsin Center for Film and Theater Research (WCFTR) has three episodes.

The Peabody Awards Collection has the only copy of “Secrets” and UCLA the only copies of “My Father and Mother” and “The Day Before Sunday.” For some of the other episodes, copies exist at all three institutions. I could find no record of the Museum of Broadcast Communications or the Library of Congress having any of the episodes.

Several of the episodes held at UCLA’s Film & Television Archive are in bad shape. “Appalachian Autumn” has “tracking problems,” for example, while “Sadbird” has a “very poor recorded image” and “Shadow Game” has “totally faded color” plus a “thick black scratch down left side of frame from 22-48 minutes into film.” It should be noted that for many of the episodes UCLA has multiple copies and some may be in better shape than others. There are seven different copies of “My Father and My Mother,” at least one of which is in black and white. Both the Paley Center for Media and the Peabody Collection also have copies of “Shadow Game” and hopefully theirs are in better shape.

The Library of Congress does have four books relating to CBS Playhouse but I’m not sure what they are. Two are for “Do Not Go Gentle Into That Good Night,” one of which is said to be 103 pages with illustrations. There is another book for “The Final War of Olly Winter” said to be 93 pages, plus sheet music for Aaron Copland’s theme or “signature” for the program.

You can find my Spotlight examining CBS Playhouse here.

13 Replies to “Status of CBS Playhouse”