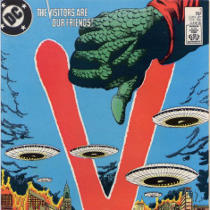 This is the last issue of the V comic I’ll be reviewing. I initially only planned on reviewing the first issue, which I did in February of 2009. I’ve mentioned before that I’m a big fan of the V franchise, which is why I’ve spent so much time reviewing and writing about its various tie-ins. But I think I’ve gone to that well a few too many times in the past year. At the end of the previous issue, Dr. Earl Meagan has contacted Diana, leader of the Visitors, with the offer of a peace conference. She accepts. As this issue opens, Lydia and Charles are questioning why Diana agreed to meet with Dr. Meagan. They think she is going to far; it is suggested that the two will soon be plotting her overthrow.

Juliet Parrish, for her part, can’t understand why Dr. Meagan is going through with his peace conference and begs him to reconsider, telling him it’s suicide. He dismisses her objections by telling her she’s becoming short-sighted, just like Mike Donovan. Juliet, now aware of Dr. Meagan’s other plan to destroy Diana if she doesn’t agree to peaceful coexistence with humanity, hurries to war Donovan, who realizes that the Visitors would blame the Resistance for Diana’s death and likely retaliate with brutality.

It turns out that Dr. Meagan believes he is to blame for the invasion of the Visitors. A decade earlier a probe was sent out into space with a peace message. It was Dr. Meagan’s idea. There’s no way of knowing whether the Visitors were drawn to Earth by the message but that hasn’t stopped Dr. Meagan from feeling incredible guilt. So, he has a micro-bomb implanted in the base of his neck. It’s a small nuclear device that could destroy a Visitor mother ship.

Mike and Willy make plans to sneak aboard Diana’s ship and somehow stop Dr. Meagan. They have no way of knowing that Diana has already detained Dr. Meagan, forcing him to activate his micro-bomb. The countdown begins. 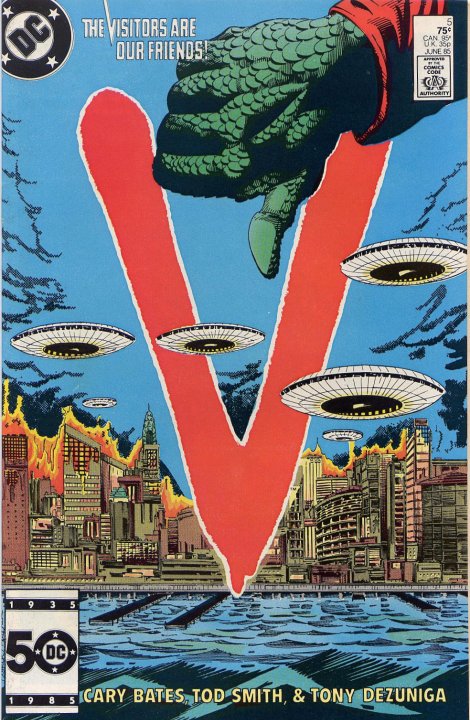 Ham Tyler and Chris Farber, meanwhile, are with Nathan Bates and Elizabeth, who Bates believes can lead him to his missing son, Kyle. But Elizabeth can only babble. One word she keeps repeating is “lakka,” which refers to Camp Lakka, a Visitor prison camp used for experimentation on humans. Ham and Chris kidnap Bates and bring him to Camp Lakka, hoping to somehow free Kyle and the other humans. They’re shocked — and disgusted — to discover that the Visitors have found a way to force-feed humans until they grow to an immense size. All the better to feed the hungry Visitors forces.

The letters column in this issue, “V-Mail,” features a paragraph explaining how changes in the television series will be reflected in the comic:

By now major changes have happened on the TV series; changes we only learned about shortly before Christmas. Some characters have died, others have moved away from the storyline. In two months we will devote a special issue to sorting out how our comic ties in with the series. There will be a passage of time, but everything will make sense in the end–we promise. And to those of you who worry that the comic might go away if the series is cancelled, we plan to be here for a long, long time.

The television series was soon canned and the comic wasn’t around for “a long, long time,” although it outlived the series by about a year. I wrote about how the comic series ended back in March.