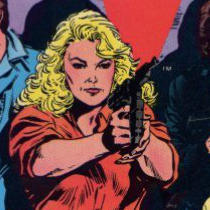 V #1 opens with a trio of trench coat wearing Visitors blasting away inside Club Creole in an attempt to kill Mike Donovan, Julie Parrish, Ham Tyler and Chris Farber. Nobody is killed but a passing Visitor patrol decides to join in the festivities and blasts the building from their hoverpad (more on that later). Ham and Chris escape through the front window while Mike and Julie disappear into the secret basement below the Club Creole. 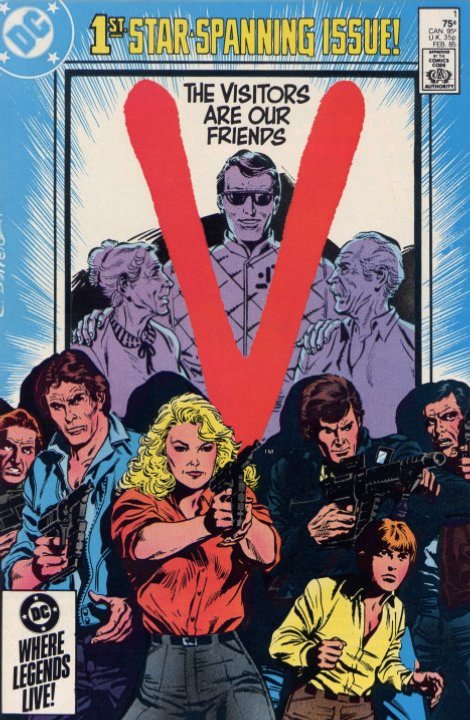 On board the Visitor’s mothership, Diana takes responsibility for the attack despite having nothing to do with it in an attempt to keep Lydia’s suspicions at bay. The attack was ordered by Nathan Bates. He hired several Visitors to kill Ham after the latter threatened to kill him. After escaping the Club Creole, Ham forces a doctor to tend to the wound Chris sustained in the Visitor attack. A group of Visitors using jet packs open fire on the two but they’re able to escape. They’re captured when they try to steal a boat.

Julie and Mike, meanwhile, test out a Visitor skyfighter captured by the resistance. Unfortunately, a transducer coil blows and Mike has to make a dangerous landing. Once on the ground, they find a group of townspeople carrying boxes waiting for them. The moment they step out of the skyfighter, however, the townspeople become terrified and run off.

The first question I had after reading this first issue was how it fit in the timeline of V: The Series. My best guess is that it picks up the action shortly the first few episodes. Diana has returned to the mothership, Ham has threatened to kill Nathan and Los Angeles has become a free city. Judging from this issue alone there doesn’t appear to be any attempt to sync up the continuity of the television series with the comic book version. I’m assume it was written before the television series premiered.

The Visitors, for example, use some interesting technology in this issue that was never seen on screen. They have a hoverpad that can hold five armed troopers as well as jetpacks. And the Visitors still have a reverberation in their voices so Mike uses a “vocasimulator” to successfully impersonate a Visitor pilot.

As for the story, it stands up to the plots of the episodes. There’s a mystery about what the townspeople were doing waiting for the Visitors with boxes (which are apparently filled with live animals). And there’s political intrigue between Diana and Lydia. Plus, Ham and Chris are being held at gunpoint by a man on a boat. The artwork isn’t quite as good as it could be in terms of recognizable likenesses. Mike, Nathan and Ham are especially generic while at times Julie and Diana do look quite a bit like Faye Grant and Jane Badler.

Without the limitations of a television budget, future issues of this comic book version of V: The Series may very well expand greatly on the mythos of the franchise. Larger battles, bigger and badder Visitor technology, that sort of thing.