Last week, eagle-eyed commenter Steve Z. noticed that the closing credits included in my article about Camp Runamuck stated “Theme Music by Bobby Darin.” Steve also stated that he couldn’t remember hearing this particular closing theme music before. These closing credits were taken from the pilot episode as rebroadcast on Comedy Central at some point in the early 1990s. 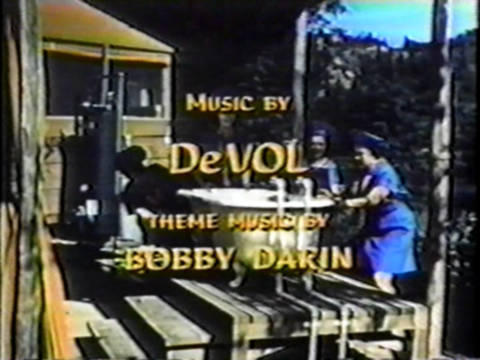 I have to admit that I hadn’t actually noticed the closing theme song wasn’t just a variation of the opening theme song. I guess I heard the whistling and just tuned out. Upon further investigation, it appears that the pilot episode featured entirely different music than the rest of the series. Opening theme music, score, everything. My guess is that when the series was repeated on Comedy Central, the opening credits from the pilot episode were replaced with those from another episode to better match the rest of the series. But the closing credits, and a version of Darin’s theme song, were retained.

Most sources (including another version of the closing credits available on YouTube) credit prolific theme song composers Howard Geenfield and Jack Keller as writing the theme song for Camp Runamuck. The two were responsible for the theme songs to a variety of Screen Gems shows, including Gidget, Bewitched, Hazel, The Wackiest Ship in the Army and Love on a Rooftop. Likewise, Hugo Montenegro is credited for providing the other music for the series. Montenegro was also involved with a number of other Screen Gems shows, writing theme music for The Outcasts, Here Come the Brides and most famously the second theme song for I Dream of Jeannie.

According to Screen Gems: A History of Columbia Pictures Television from Cohn to Coke, 1948-1983, the original “title song” for Camp Runamuck was written by Frank DeVol and performed by Bobby Darin [1]. Notice that the closing credits from the pilot episode do indeed state “Music by DeVol” in addition to “Theme Music by Bobby Darin.” DeVol co-starred in the pilot but due to illness was replaced by Leonard Stone. At the time TV Guide reported he would continue to provide the music but apparently that didn’t happen and he was replaced by Montenegro.

Al DiOrio, in his biography of Darin (revised and republished in 2004), states that Darin wrote the theme song for Camp Runamuck as well as another short-lived sitcom, Wendy and Me, but makes no mention of him performing it [2]. So there is still some question as to Darin’s exact involvement.

I’ve revised my article with this new information about Camp Runamuck‘s two themes.