Over the past week or so, as I’ve thought about the prehistory and early days of Television Obscurities, I found it somewhat ironic that so little of the websites that eventually evolved into Television Obscurities remain. At some point in the future, if it isn’t happening already, cultural historians will lament the fact that so many websites have disappeared forever. By 1996 there were some 100,000 websites in existence. How much evidence of them still survives? But I digress.

Although I use June 11th, 2003 as the launch date for Television Obscurities, in reality it can be traced back to the late 1990s. I don’t know exactly when but at some point in 1999 I began building a personal database of television shows. It was never intended to be put online so I freely copied information from a variety of resources. I called this database “The Archive of Television Shows.” I last updated it in May 2000.

I barely remember what “The Archive of Television Shows” looked like. I built it using Microsoft Frontpage. I do recall it utilized frames. I think it had entries for a hundred shows or so. The New People was one of them. Although I kept it until at least 2003, I can no longer find any trace of it. I have switched computers so many times over the past 15 years its not surprising that it disappeared.

In October 2000 I launched a website called “Forgotten Television.” I think it was hosted at Geocities, at least at first. Most of my websites were hosted by Tripod. I have no idea what this site looked like or what sort of shows were included. I renamed it “Television That Time Forgot” in November 2001 but again, I have absolutely no recollection of what sort of information it contained.

In February 2001 I also launched a standalone website dedicated to The New People It was last updated in early 2002. I do have several copies of this site saved on my computer. Here’s a screenshot of how it originally looked:

At one point around 2001/2002 I was running six different websites, most dedicated to various television shows. There were at least three or four others I started but never actually put online. It was an interesting time in my life.

I gave up on “Television That Time Forgot” in early 2002 for reasons I can’t remember and started working on something called “The Forgotten Television Portal” that never really got off the ground. I don’t know if it ever went online. I do still have a few banners I made for the site.

The original version of Television Obscurities was launched in November 2002 with just five articles. It also had a message board, a reader survey and a monthly poll. I didn’t save a copy but here’s what it looked like in December 2002, courtesy of the Internet Archive Wayback Machine (all the pictures are missing): 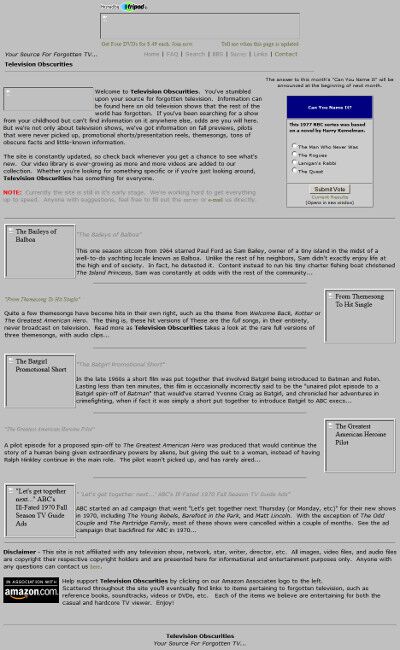 You can’t read it but there’s a notice that says “Currently the site is still in it’s early stage.” For the record, the five articles were “The Baileys of Balboa,” “From Themesong To Hit Single,” “The Batgirl Promotional Short,” “”The Greatest American Heroine Pilot,” and “‘Let’s get together next…’ ABC’s Ill-Fated 1970 Fall Season TV Guide Ads.”

I apparently decided to place this version of Television Obscurities on hiatus shortly after launching it because I didn’t have any additional content. It relaunched on June 11th, 2003 and that is the anniversary I’m celebrating this week.

Check back tomorrow for Part 2 of the History of Television Obscurities.