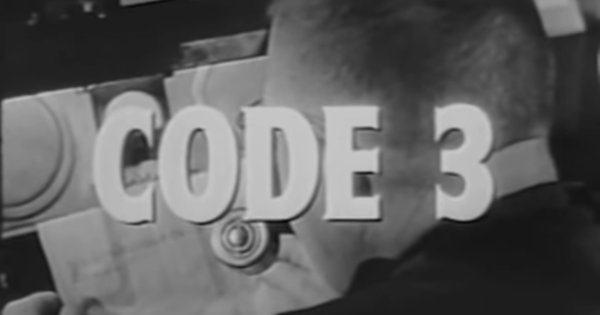 This show opening showed a pneumatic tube carrying a document throughout a big office building. Newspaper? Police headquarters? Can’t recall anything else–maybe I changed the channel! Late 50’s to 60’s is a guess.
Lee

Code 3, a half-hour police drama that premiered in syndication in 1957, featured an opening credits sequence in which a document was sent through a police station via pneumatic tube, just as Lee remembers. The series was produced by Hal Roach Studios and distributed by ABC Film Syndication.

Five episodes of Code 3 can be found at the Internet Archive. I’ve embedded one below:

The crimes and cases seen on Code 3 were supposedly drawn from the actual files of the Los Angeles County Sheriff’s Department, which cooperated in the production of the series by providing technical assistance to ensure authenticity. Eugene W. Biscailuz, the real-life sheriff of Los Angeles County at the time, offered his own comments at the end of many episodes.

A total of 39 episodes were produced. Rheingold Beer was one of the primary regional sponsors. Other sponsors included National Biscuit, Signal Oil, Top Value Stamps, and Crosley-Bendix.

On Friday evening, September 16, 1966 on NBC network, a one-time pilot showing entitled “Ghosthunter” or “Ghosthunters” was transmitted. Never saw any subsequent programs or rerun of original pilot. Can you research this and find out more?
James

Originally under consideration at NBC for the 1965-1966 season, “The Ghostbreaker” was produced by MGM-TV through Arena Productions with Normon Felton serving as executive producer. Peter Stone and Sherman Yellen wrote the pilot script.

Kerwin Mathews starred as Barnaby Cross, an associate professor of parapsychology who moonlighted as an investigator of all things supernatural. The plot of the pilot episode saw Barnaby trying to solve a mysterious murder. Diana Van der Vlis played his assistant, Cassandra, who was a hypnotist.

“The Ghostbreaker” was one of six pilots NBC tested on air during the opening week of the 1967-1968 season. The network hoped to use viewer reaction and ratings to help determine whether to pick up any of the pilots as mid-season replacements or for the 1968-1969 season.