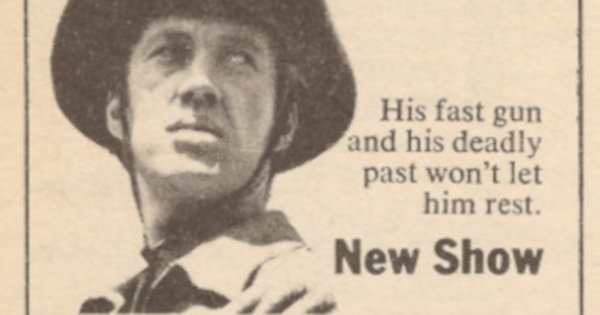 Technically, these are two different quarter-page advertisements stacked by TV Guide to make a half-page ad. Note the thin black line separating the ads, which are for TV shows on different networks.

Both Shane and Pistols ‘n’ Petticoats were new shows that premiered in September 1966. Shane was based on the 1949 novel by Jack Schaefer. David Carradine starred. It premiered on Saturday, September 10th, which was a week before this ad ran. The western was cancelled after only a few months on the air. A total of 17 episodes were broadcast between September and December 1966.

Pistols ‘n’ Petticoats was a new CBS sitcom starring Ann Sheridan, who passed away in January 1967 before production on the show’s first and only season was complete. It was cancelled at the end of the 1966-1967 season after airing 26 episodes.

This particular ad is from the Iowa Edition of TV Guide, which covered stations in the Central Time Zone. In the Eastern and Pacific time zones Shane ran from 7:30-8:30PM while Pistols ‘n’ Petticoats ran from 8:30-9PM. Channel 5 was WOI-TV in Ames; Channel 8 was WQAD-TV in Quad Cities; and Channel 9 was KCGR-TV in Cedar Rapids; Channel 2 was WMT-TV in Cedar Rapids; Channel 4 was WHBF-TV in Quad Cities; and Channel 8 was KRNT-TV in Des Moines.