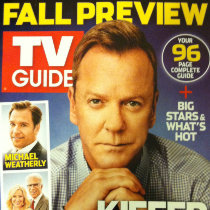 TV Guide‘s 2016 Fall Preview issue has arrived. Don’t be fooled by the circle on the front cover declaring it “Your 96 Page Complete Guide” because the Fall Preview section isn’t even 30 pages long. This year’s look at new TV shows is considerably shorter than last year’s when the dedicated Fall Preview section ran for more than 50 pages.

I had a hard time finding a place to buy the 2016 Fall Preview issue. Last week I scouted three pharmacies and a supermarket–none of them had TV Guide. Today I hit another supermarket before heading to Barnes & Noble. There were just two copies in the magazine section. Did I feel a little guilty about taking both of them? Yes, I did. But I always buy two copies. While waiting in line to pay, I spotted six or seven additional copies.

Because I only buy TV Guide once a year, I forget how expensive it is. At $4.99 per issue, this is definitely not a magazine you want to be buying every week (if you can even find it). Subscriptions cost just $16.50 a year. I’ve never had a subscription but I’m pretty sure I have family members who still do.

You won’t find individual reviews in this issue. Or much of anything, really. Matt Roush offers a two-page critical overview of the fall crop rather than a brief “Matt’s Take” for every show. He praises Designated Survivor, This Is Us, Pitch, Speechless, and No Tomorrow. Kevin Can Wait, Man with a Plan, Conviction, and Notorious are among the duds.

There are also no “Editors’ Picks” this year. How will anyone know what to watch if the editors of TV Guide won’t share their favorites new shows? The prime time grid is back, though.

A total of 25 shows are included in the Fall Preview section. They’re ordered by day of the week. Five are cable shows: Good Behavior (TNT), Incorporated (Syfy), Dick Gently’s Holistic Detective Agency (BBC America), Westworld (HBO), and Divorce (HBO). Why those five cable shows are worthy of the TV Guide Fall Preview issue is a mystery. Six additional cable shows are lumped together on a single page after Sunday’s new shows. Last year’s Fall Preview issue also lumped cable in with broadcast, which I find annoying. Unlike last year, however, there are no separate sections for streaming or PBS.

Not every show gets a full write-up. No Tomorrow and Lethal Weapon barely get a full paragraph. Designated Survivor, on the other hand, is given two full pages (four if you count the two-page spread featuring Kiefer Sutherland that opens the Fall Preview section). Timeless, This Is Us, Speechless, The Good Place, MacGyver, and HBO’s Westworld also get two pages.

I don’t buy TV Guide‘s Fall Preview issue every year because I’m looking for information about new TV shows. Buying it is a tradition every year and I collect Fall Preview issues. As long as they’re being published–and as long as I can find them without too much hassle–I’ll keep buying them.

Most people have no need for TV Guide anymore. There’s really nothing the magazine can offer that can’t be found online earlier and for free. That’s just the way it is. I honestly wouldn’t be surprised if it stops publishing in the next few years.

According to the Alliance for Audited Media, TV Guide had a circulation of 1,571,537 during the first six months of 2016. When the magazine was sold last year its circulation was around 1.8 million–but it was profitable. I suppose as long as it remains profitable, it will keep being published.

Still, I know I got a thrill out of flipping through this year’s Fall Preview issue, even if it’s overpriced for the content. Seeing the full-page advertisements for new TV shows brings me back to a simpler time (and I’ve only been really invested in Fall Preview issues since the late 1990s/early 2000s). I’m sure I’m not the only one.

Are you still a subscriber? Are you having trouble finding it in stores? Hit the comments with your thoughts on TV Guide‘s 2016 Fall Preview issue.