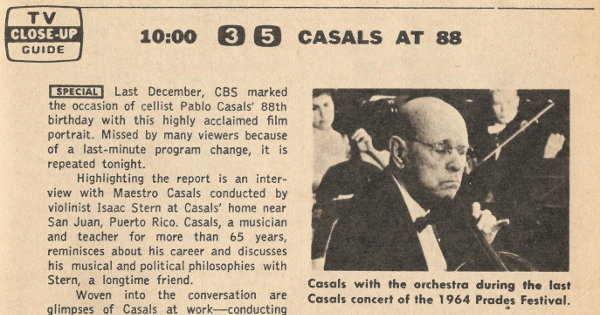 Here’s a TV Guide Close-Up from March 1965 promoting a rebroadcast of “Casals at 88” on CBS:

Before DVRs and VCRs, if you weren’t able to watch something on television when it aired, you were pretty much out of luck. Unless, that is, the network decided to repeat it. CBS did just that in March 1965 when it rebroadcast “Casals at 88,” an hour-long special celebrating the 88th birthday of cellist Pablo Casals. As the Close-Up points out, a last-minute scheduling change meant many viewers didn’t see it when it originally aired in December 1964.

This particular Close-Up is from the Eastern New England Edition of TV Guide. Channel 3 was WTIC-TV in Hartford, CT; Channel 5 was WHDH-TV in Boston, MA.