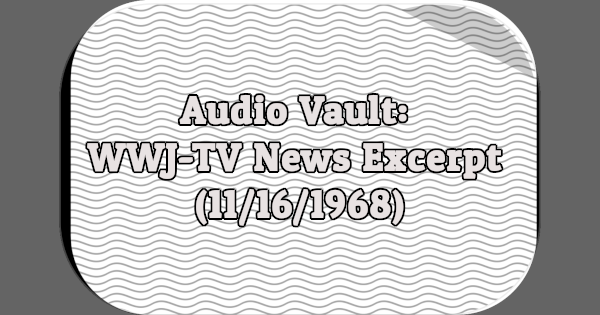 Here’s audio from the beginning of a November 16th, 1968 newscast on Detroit’s WWJ-TV:

Back in February, I wrote about a collection of reel-to-reel audio tapes used to record network and local TV programs between 1967 and 1972. This audio comes from that collection. One of the programs recorded was a NBC special called “Jack Benny’s Bag.” It aired from 10-11PM on Saturday, November 16th, 1968.

Because the tape recorder continued running for about 30 seconds after the end of “Jack Benny’s Bag,” it inadvertently captured the start of WWJ-TV’s 11PM newscast that night. There’s a brief “color presentation” announcement followed immediately by the first news story.

Perhaps someone from Detroit will recognize the voice of the anchor reporting the news. For the record, WWJ-TV is now WDIV-TV; an unrelated TV station in Detroit goes by the WWJ-TV call letters.

(Also, I only know the spelling of the defendants’ names because I found an article about their arraignment online.)

The following program is a Channel 4 color presentation.

Good evening. Two Detroit policemen allegedly involved in the Veterans Memorial incident where three youths were beaten two weeks ago were arraigned today in Recorder’s Court. Patrolmen Leo Haidys, Jr., charged with felonious assault, and Patrolmen Richard Stinson, charged with assault and battery, listened to the complaints and pleaded innocent to the charges. Both defendants were released on bond pending examination and trial.