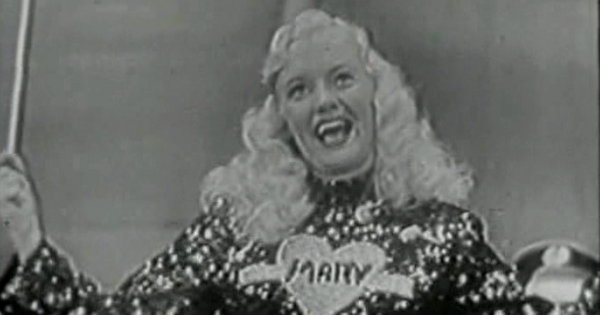 NOTE: This episode aired between January 1949 and December 1955.

Super Circus debuted on January 16th, 1949. It aired live every Sunday on ABC. Claude Kirchner served as ringmaster. Mary Hartline, clad in a majorette uniform, acted as bandleader. There were also three clowns: Cliffy, Scampy, and Nicky. The series originated in Chicago until December 1955, when production shifted to New York City. Kirchner, Hartline, and the clowns were all dropped.

NOTE: Bardy Patton, son of Super Circus producer Phil Patton, was the first Scampy. He was replaced by Sandy Dobritsch at some point in 1953 or 1954. I honestly don’t know which of them appears as Scampy in this episode.

The episode opens with Cliffy the Clown busting through a big drum to welcome viewers to another fun-filled episode. He then makes a pitch for Snickers and 3 Musketeers candy bars, both from Mars. Ringmaster Claude Kirchner also welcomes viewers before introducing the first act: a chimpanzee named Tony the Bonzo Kid.

Tony is dressed like a cowboy. He does some rollerskating, smokes a cigarette, runs in a circle while performing somersaults, rides a tricycle, dances with his trainer, rides a rocking horse, walks across a pole, eats a meal, and plays a toy fiddle.

Claude returns to introduce a skit that doubles as a Snickers commercial. It features Mary Hartline, Cliffy, and two other clowns: Scampy and Nicky. Mary then leads the Super Circus orchestra in a performance, furiously waving her conductor’s baton.

Next, poor Nicky climbs into a box and is run through with swords during the Super Circus Side Show segment. One of the swords is gigantic, prompting a bit of physical humor as Mary, Cliffy, and Scampy stick it through the box. Once the swords are removed, Nicky seems disoriented but otherwise unharmed.

After another pause for Claude to talk about 3 Musketeers, it’s time for a lengthy acrobat act with the Noble Trio. The two men and a woman spin, tumble, and flip around and atop a set of parallel bars. The act ends with the woman hanging by her neck from a strap.

Claude, Mary, and the clowns gather to say goodbye to the audience and viewers–and hawk Snickers and 3 Musketeers one final time. Nicky, still recovering from his ordeal with swords earlier in the episode, needs another drink. The water spews out of multiple holes in his jacket and the audience goes wild.

There’s not much I can review, to be honest. Perhaps the most interesting aspect of this episode is how often Snickers and 3 Musketeers are mentioned. It’s basically one long commercial for Mars Bars. At one point, the young studio audience is shown devouring candy bars, big smiles on their faces.

If I were a youngster in the mid-1950s watching Super Circus on TV, I probably wouldn’t have thought twice about a chimpanzee smoking a cigarette. There’s no denying that Tony the Bonzo Kid knows a lot of tricks. But in 2017, and as an adult, it’s a little unsettling to see his trainer offering him the cigarette time and time again.

Mary Hartline has been called one of television’s first sex symbols. That seems quint, almost unbelievable. There’s nothing sexy about watching her enthusiastically conduct the orchestra. To be fair, as is the case with Tony the Bonzo Kid, it’s impossible for me to view Mary Hartline from the perspective of a 1950s television viewer.

The fact that Super Circus ran for so long–and ABC considered it important enough to transplant to New York City–means it drew an audience week after week. The show, and Mary Hartline, had fans. While it may be difficult for me to understand its popularity, based on this episode and one other that I’ve watched, that’s no reason to dismiss or mock it.

Super Circus aired live from 5-6PM ET (4-5PM Chicago time) on Sundays. Some stations only aired half of the show each week. Also, half-hour filmed versions were created for use by stations that didn’t carry any portion of the show. This is one of those 30-minute filmed episodes. The duration of this episode is 29:28 without any external commercials. All of the commercials are integrated into the show.

The ABC eagle logo is seen after the closing credits.

Alpha Video release this episode, and five other episodes of Super Circus, on DVD back in 2008. It may also be available on YouTube and/or the Internet Archive.

Were you a fan of Super Circus when you were a kid? If so, did your father watch with you so he, too, could enjoy seeing Mary Hartline? Hit the comments with your thoughts.