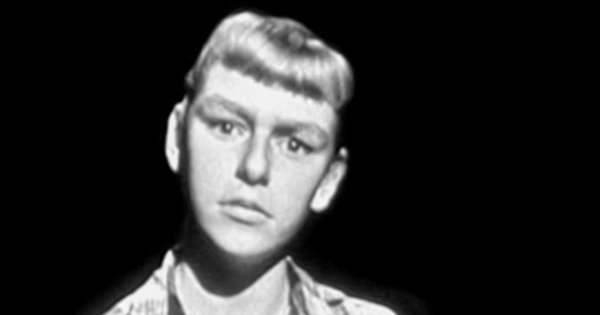 Retro Review examines episodes of short-lived, forgotten, or obscure television shows. Each column includes both a short summary and a review. 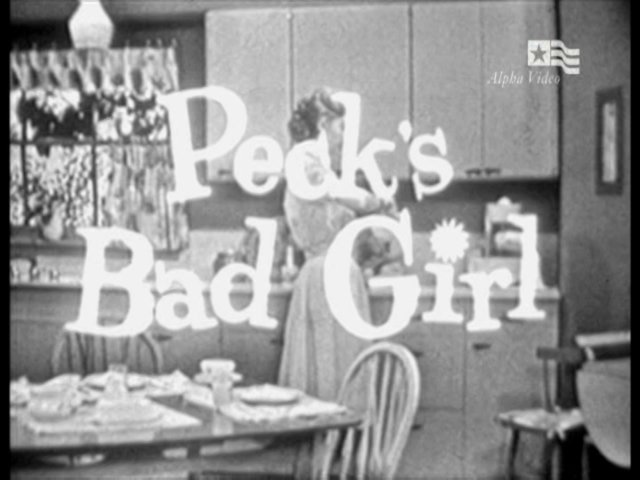 This short-lived sitcom ran for 14 episodes on CBS between May and August 1959. Wendell Corey and Marsha Hunt star as Steve and Jennifer Peck. Patty McCormack plays their 12-year-old daughter Torey, the “bad girl” the show is named after. Ray Ferrell rounds out the main cast as Torey’s little brother Roger. Each episode opens and closes with Torey breaking the fourth wall to speak directly to the audience about her life.

Bart Bradley as Alfred
and Juney Ellis as Mrs. Wilkins

Torey wants to wear lipstick to a party but her father doesn’t want her to. Despite worrying she spends too much time playing baseball and hasn’t outgrown her tomboy stage, Steve isn’t ready for his little girl to wear lipstick or think about boys. But if half the other girls at the party are wearing lipstick, he says Torey can, too.

When her friend Louise refuses to wear lipstick because she’s too nervous, Torey tries to change her mind. The two talk about boys and practice walking the way women do in the movies.

Mr. Peck meets Alfred, the boy taking Torey to the party. He’s short for his age, so he insists any girl he goes out with wear lipstick.

Later, Louise calls. Her mother won’t let her see Torey anymore. When he learns Torey was showing Louise how to get boys to like her, Steve isn’t happy. Boys, lipstick, and now Torey is corrupting Louise. Torey says father doesn’t understand and he agrees. She’s growing up too fast and he doesn’t get to spend enough time with her.

That night, Torey comes downstairs wearing the dress her father preferred and no lipstick. She also isn’t going to the party with Alfred. Torey apologizes for being too busy for her parents and promises to make more time for them.

At the party, Steve rescues Torey from listening to Mrs. Wilkins, a chatterbox. She thought her parents would want her to stay around the other grown ups but they tell her to go play with the other kids and have a good time.

I’ve watched this episode twice, once when I first purchased it on DVD six or seven years ago and again while preparing this column. The word that best describes it is harmless. Peck’s Bad Girl aired on network television in 1959 so of course there’s nothing bad about Torey Peck. She’s precocious and a bit of a tomboy but otherwise wholesome.

I’m sure fathers in 1959 did (and fathers in 2019 still do) worry about their 12-year-old daughters wanting to wear lipstick. In that respect, “Lips That Touch Lipstick” is a timeless story of a father learning to let go of his little girl and allow her to start growing up.

I have a hard time watching sitcoms from the 1950s because they’re so rarely funny. None of the humor in this episode–like Steve worrying Torey is still a tomboy one minute and panicking about her wanting to wear lipstick the next or Torey teaching Louise how to walk to attract a boy’s attention–is funny. Not to me, at least.

Actually, there is one funny moment when Steve has to physically spoon food into Roger’s mouth because Roger is too focused on watching television to feed himself.

The scene in which Steve meets Alfred is supposed to be funny but it’s not. Alfred insisting that Torey wear lipstick because he can’t be short and date a girl who won’t wear lipstick is played for laughs. But unlike Torey, Alfred doesn’t come across as mature for his age. He just seems creepy.

Wendell Corey does a good job portraying Steve Peck as a worried but loving father. Marsha Hunt has less to do, although near the end of the episode Jennifer, too, has trouble with their daughter growing up. Ray Ferrell’s Roger is a suitably annoying little brother.

Patty McCormack outshines the rest of the cast as Torey, whether she’s talking directly to the audience about how her family doesn’t understand her or looking back at her father while walking upstairs after realizing how much he loves her.

It’s never wise to judge a TV show after watching just one episode (even if, like Peck’s Bad Girl, there are only 14 episodes) but I suspect all of the episodes are like this one. Harmless with mild humor that hasn’t aged well.

Alpha Video released “Lips That Touch Lipstick” on DVD in December 2013. For the record, The UCLA Film & Television Archive has another episode (“Slumber Party”) in its collection.

Do you remember watching Peck’s Bad Girl on CBS back in 1959? Hit the comments with your thoughts about the show or this episode.