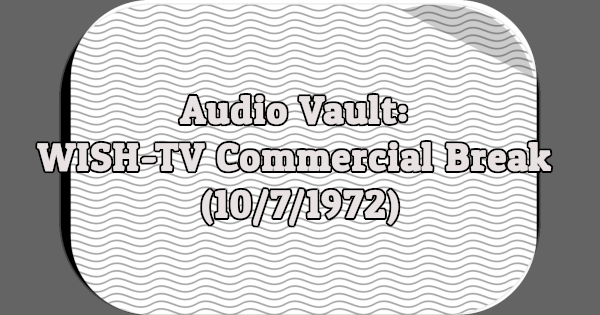 This particular commercial break aired during an episode of Bridget Loves Bernie (8:30-9PM ET). It doesn’t actually include any commercials. Instead, there’s a political advertisement for Matt Welsh as governor of Indiana and a public service announcement for safe trick or treating.

[Matt Welsh Political Ad] “You know, it’s natural to look back at our lives and remember things as being better than they are today. We’ve all done it. The air and lakes seemed cleaner, schools seemed better, there was less crime, more jobs. But you know something? When Matt Welsh was governor, the air and lakes were cleaner, schools were better, there was less crime and more jobs. That’s why Indiana needs Matt Welsh as governor again. Matt Welsh stands for the kind of Indiana we ought to have. Always has.”

[Safe Trick or Treating PSA] “For a safer, happier Halloween, make it a family affair. Accompany your children on trick or treat outings. Confine their visits to your immediate neighborhood. Avoid masks. Select light colored, non-flammable costumes. And examine treats at home first. Provided by E.J. Brach & Sons as a public service. Presented to the public interest by WISH-TV.”