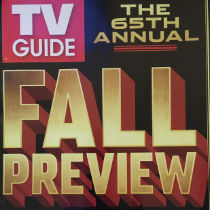 TV Guide‘s 2017 Fall Preview issue hit newsstands last week. How obsessed am I with collecting these issues? I called my local Barnes & Noble immediately after it opened on Thursday to ask if the new issue had arrived yet. Assured it had, and with a copy safely behind the counter with my name on it, I waited until afternoon to go get it.

The cover proudly declares this the 65th annual Fall Preview issue of TV Guide magazine. Just 28 of the 96 pages are about to the new fall season, however. That’s about the same as last year’s Fall Preview issue. Back in 2015, the magazine devoted more than 50 pages to new fall programming.

As I do every year, I purchased two copies of this issue. At $4.99 each plus tax, I spent more than $10 on a pair of magazines I’ll likely never look at again after today. But I can’t help it. I’m a collector.

This Fall on Television

Don’t expect to find individual reviews. The only critical analysis comes courtesy of Matt Roush’s two-page look at the new season, which technically isn’t part of the Fall Preview section. He’s optimistic about Young Sheldon (CBS), The Mayor (ABC), The Gifted (FOX), Me, Myself & I (CBS), and a few others. Among the shows he doesn’t like are Marvel’s Inhumans (ABC), Wisdom of the Crowd (CBS), and Dynasty (The CW). Roush also praises The Long Road Home (National Geographic) and The Deuce (HBO).

Six of the new shows receive the “Matt’s Picks” seal of approval: The Good Doctor (ABC), Young Sheldon (CBS), The Mayor (ABC), Will & Grace (NBC), Ten Days in the Valley (ABC), and The Deuce (HBO).

A small “Also Coming…” box mentions five additional shows on Netflix, Showtime, and Hulu. A two-page calendar includes dozens of others. That’s how the Fall Preview section can boast it covers 95 new shows.

To commemorate the 65th anniversary of the Fall Preview issue, TV Guide dug into its archives to include a pair of flashbacks to the 1981 and 1975 Fall Preview issues. Editor-in-Chief Michael Fell also offers his pick for the best network television lineup of all time: Saturdays on CBS during the 1973-1974 season.

Personally, I’d like to see more of this type of content. But I’m impressed that TV Guide saw fit to give any sort of nod to its history.

At some point, the magazine will no longer make money. When that time comes, the TV Guide Fall Preview issue will likely cease to exist. Until then, I’ll keep buying it every year. Not because I need help deciding what to watch on the networks, but because it’s become tradition.

Bonus! Watch commercials for the 1962 and 1979 Fall Preview issues.

Do you still subscribe to TV Guide? Were you able to find this year’s Fall Preview issue on newsstands? Hit the comments with your thoughts.