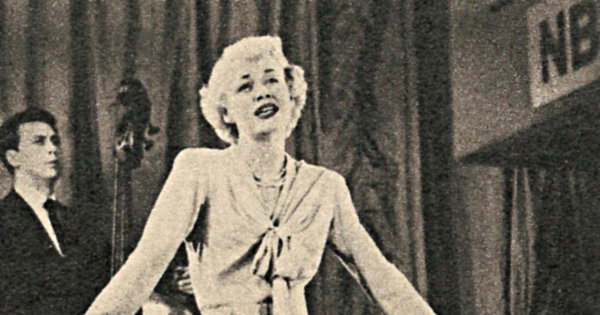 For Your Pleasure, the first TV show hosted by Kyle MacDonnell, premiered 70 years ago today in 1948. The 15-minute musical/variety show aired from 8-8:15PM ET on NBC. Kyle sang two songs (“How High the Moon” and “I Wish I Didn’t Love You So”) during the episode. It also featured comic Dan Henry and dancers Jack and Jill. Fred Coe served as director with Frank Burns as technical director. Not surprisingly given its age, For Your Pleasure is a lost TV show.

Although it ran for just 20 episodes, For Your Pleasure propelled Kyle MacDonnell to stardom. Here’s a glowing review from The New York Time‘s Jack Gould, published three weeks after For Your Pleasure‘s debut:

But it is in her singing that Miss MacDonnell has most immediately carved a niche for herself. If on stage her voice is a little weak, on television the amplifying qualities of the microphone stand her in good stead. Her mezzo-soprano comes over true and clear yet in a straight torch number she can inject a meaningful sultriness which is box-office plus. Thanks to her theatrical training, she also knows what to do with her face during a number, something that cannot be said for many feminine vocalists accustomed to the unseeing microphone. Her change of expression compliments rather than contradicts the lyrics. All in all, Miss MacDonnell is providing that rare treat among performances–the vivacity of youth combined with professional stage presence.

The Norman Paris Trio were regulars on the show but did not appear in the first episode. Another dance team, Blaire and Deane, replaced Jack and Jill after two few months.

One Reply to “70th Anniversary of For Your Pleasure”